Karate Kid Ralph Macchio: ‘I’m at peace with the choices I made’

He crane-kicked his way to stardom in the 1980s film, but chose to put family before fame. Now he’s back in his most famous role in a comedy sequel 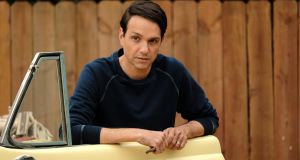 In the past 36 years, there has been, Ralph Macchio says, just one day, maybe, when someone hasn’t mentioned The Karate Kid to him. “It might have been a day when I was sick and stayed in my room all day. But, yeah, it is pretty often,” Macchio tells me on the phone from his home on Long Island, sounding every inch the cheerful suburban dad he has been for the past three decades.

“It’s a rare sporting event I go to when I don’t hear [the Joe Esposito song] You’re the Best Around. And if I’m in a Japanese restaurant and a fly is in the building, I have about nine seconds to get out,” he says, referring, of course, to the legendary Karate Kid scene in which Daniel (Macchio) catches a fly with chopsticks.

It is hard to convey just how stratospherically famous Macchio, now 58, became when The Karate Kid – in which he played plucky lower middle-class teen Daniel LaRusso, crane-kicking the snotty rich kids – came out in 1984. In the 1980s, a young person could become a huge star with just one movie and, to a large extent, those movies still define those actors: Tom Cruise had Risky Business, Matthew Broderick had Ferris Bueller’s Day Off, Michael J Fox had Back to the Future and Macchio had The Karate Kid.

If I’d been trying to grab that gold ring every chance, maybe I would have had more [jobs]

Nostalgia for those films and the deceptively basic (but actually tenaciously deep) joys they brought means 1980s films are, once again, having a comeback, with the third Bill & Ted film getting released next month in the UK, a fifth Indiana Jones apparently creaking out in 2022, and the official sequel to Dirty Dancing now in the works.

But it’s The Karate Kid – seemingly the most simple of 1980s blockbusters – that has unexpectedly had the most satisfying afterlife with Cobra Kai, the ludicrously enjoyable series that started on YouTube and has just been bought by Netflix.

Cobra Kai is the ultimate fan fic, but in the best possible way. Created by Karate Kid superfans Josh Heald, Jon Hurwitz and Hayden Schlossberg, it imagines what happened to Daniel and his nemesis Johnny (William Zabka) 34 years on from the famous tournament, with Daniel now a successful car salesman and Johnny a barely functioning alcoholic, until he decides to reopen a certain karate school. But what could have been pure self-indulgence becomes surprisingly rich and textured, as Heald, Hurwitz and Schlossberg take seemingly minor elements from the original film (most notably the social class differences between Daniel and Johnny, but also the cars, the houses and the great fan debate about whether Daniel cheated in the tournament) and blow them up into whole episodes that go to far deeper places than the movies touched upon.

“Jon, Josh and Hayden know way more about the films than I ever did,” says Macchio. “We’ll be shooting a scene and they’ll say: ‘Remember that time you lifted your left arm? The way you pointed that finger was definitive to my childhood!’ I’m like: ‘Dude, I was just saying a line!’ Oh, it’s really wonderful.”

One of the many joys of Cobra Kai is how many of the original cast members appear in it. As well as Macchio and Zabka there’s Martin Kove, who played the bullying Cobra Kai teacher Kreese, and Randee Heller, aka Mrs LaRusso, Daniel’s mother. There is even a hint at the end of the second series that Elisabeth Shue, who played Daniel’s girlfriend Ali, might make a comeback. But there is one gaping absence and that is Mr Miyagi, Daniel’s sensei, played by the wonderful Pat Morita, who died in 2005.

“That’s been tough,” says Macchio, who spoke at Morita’s funeral. “There’s a montage scene in series two in which I’m teaching a younger kid, just as Miyagi taught LaRusso, and that brought a real rush of emotion for me. Every time we shoot I hearken back to those early days of rehearsal with Pat.”

And yet, as beloved as Mr Miyagi was as a character, even getting an Oscar nomination for his performance, some Asian Americans have since said that they felt stereotyped by him, getting teased about his exaggerated accent (which Morita put on for the part) and constantly fending “wax on, wax off” references. Was Morita aware of the criticisms?

“I’m trying to dive into my memory on that. I know he took great pride in the role,” says Macchio. “You know, Karate Kid was the first Hollywood movie that dealt with the Japanese internment camps. Also, there’s a scene in which a guy calls Miyagi a really derogatory name and makes fun of how he talks, and Miyagi [gets the better of him when he] breaks his beer bottles. So I think in that respect, the movie was ahead of the curve.”

Macchio made three Karate Kid films with Morita, with diminishing returns – the original, though, remains a stone-cold classic – and there was a fourth with Hilary Swank and Morita. Will Smith attempted to revive the franchise in 2010, now set in China, with his son Jaden and Jackie Chan as the mentor. It had, shall we say, a mixed reception.

Macchio, famously one of the nicest people ever to appear on screen, is too kind to trash it, saying only “It enhanced the legacy of the original,” and he allows himself to point out: “Also, there’s no such thing as karate in China, so it should have been called The Kung Fu Kid.”

I wasn’t the biggest risk-taker, and I’m sure there were lost opportunities because of that

While pretty much every other successful young actor in the 1980s went through some kind of emotional off-screen ordeal, Macchio remained straight and stable, mainly living with his parents on Long Island and marrying his childhood sweetheart, Phyllis, when he was 26. They are still together and have two children.

Macchio’s steadiness – which he puts down to his “upbringing and natural sensibilities” – is so renowned that Funny or Die made a very amusing film in which the actor tries to behave badly to beef up his career. It’s a good joke, but there is some truth to it, Macchio admits, because he always put personal stability before fame.

“If I’d been trying to grab that gold ring every chance, maybe I would have had more [jobs], but I couldn’t get to them because I was watching a baseball game back in my home town,” he says. “I wasn’t the biggest risk-taker, and I’m sure there were lost opportunities because of that. But also, maybe my caution helped me to stay grounded, so I’m at peace with the choices I made.”

Macchio has always been remarkably good-natured about being so associated with Karate Kid, even though he has had a perfectly healthy career as a jobbing actor beyond it. His first big break was in Francis Ford Coppola’s The Outsiders, alongside Tom Cruise, Rob Lowe, Matt Dillon and Emilio Estevez, and Lowe recounts in his memoir how Macchio was the on-set joker.

“I always try to go for the joke, maybe because I’ve always been the smallest guy or the youngest-looking guy, so that was my defence,” he says. (Incredibly, despite looking about 13, Macchio was 22 in Karate Kid.) His other best-known role was in My Cousin Vinny, and Macchio compares the famous chemistry between Joe Pesci and Marisa Tomei with what he had with Morita. More recently, there have been steady TV roles in Ugly Betty and The Deuce.

But Karate Kid retains a special place in his heart, so much so that he named his son, Daniel, after his character in the film. “There was a chunk of time when my son was like: ‘Did you have to?’ But now he’s proud of it. Unlike Ralph, Daniel is a classic, it never goes out of style, you know?” – Guardian

Cobra Kai seasons one and two are available on Netflix on Friday, with season three due later this year