Will this be the film that delivers first Oscar for Irish film star? 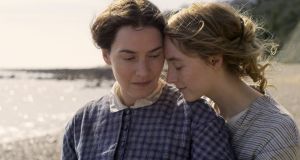 Let us not pretend we don’t live in the real world. The first trailer for Francis Lee’s Ammonite, detailing the relationship between two real-life fossil hunters in Victorian England, will generate the wrong sort of chatter in abundance. One part of social media is awhirl about a passionate kiss – and implied sex sequences – between Kate Winslet and Saoirse Ronan. Another, more sober strain is wondering if Ammonite will be the project that finally secures Ronan her first Oscar (and Winslet her second). What else do we have to discuss in the year that cinema went to sleep?

Before sinking to such vulgarity, we should note that this promises to be a cracking film. Lee, director of the excellent gay romance God’s Own Country, has, for his second picture, settled on the story of palaeontologist Mary Anning and her fossil-burrowing colleague Charlotte Murchison. Any cursory glimpse at the facts will confirm that Lee is applying liberal artistic license. In real life, Anning was 10 years younger than Murchison. Winslet, who plays Anning, is around 18 years older than Ronan, playing Murchison. Anning’s relatives have already complained to the press that there was no evidence of any sexual relationship between the two woman.

No matter. Ammonite is not a documentary. Offering us damp, windswept vistas of the Dorset coast – as damp as the Yorkshire of God’s Own Country – the trailer efficiently establishes the premise and takes us right up to the characters’ passionate release. Getting her lips around a west country accent, Winslet (grumpy, assertive) accepts poor melancholic Ronan as an assistant and, handing her a pair of stout boots, allows her to root around in the sand for traces of prehistoric molluscs. Kate spots Saoirse dressing. Our own Fiona Shaw, as fellow fossil collector Elizabeth Philpot, is pleased that the two young woman have “struck up a friendship together”. It soon becomes clear that they have become the closest of friends. We’ll leave the excited gasps to meme fanatics on the internet.

We can tell little about a film’s quality from the trailer alone, but Stéphane Fontaine’s photography is lovely and the actors – well, what would you expect? – fire out their lines with characteristic gusto. There is, however, no getting away from the that fact that Ammonite looks, so far, like the sort of film that generates Oscar nominations. Does that count for anything in this strange, strange year?

Lee’s film will premiere largely virtually at the Toronto International Film Festival on September 11th. The critics will all be watching online from the comfort of their dens. The US release is currently scheduled for November 11th, but, even if that is delayed, the distributors, following a change in regulations due to the Covid crisis, now have until the end of February to get their film in cinemas and qualify for Oscars. We don’t know what potential competitors will fail to emerge from the pandemic fog. We also can’t be certain which actor will compete in which race, but, as studios don’t like to split their vote and Winslet seems the senior partner, we can make a safe bet that she will be up for best actress and Ronan is up for best supporting.

The Irish star’s potential rivals include Olivia Colman as an Alzheimer’s carer in The Father (already screened at Sundance), Toni Collette in Charlie Kaufman’s I’m Thinking of Ending Things (on Netflix next week) and Glenn Close in Ron Howard’s Hillbilly Elegy (another Netflix release). Winslet has some classy potential rivals in Amy Adams, Viola Davis and two Elizabeth Mosses (for Shirley and The Invisible Man).

Not for the first time in pandemic season, nobody knows anything.