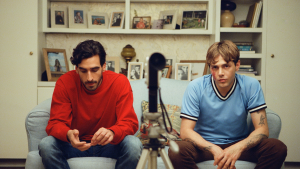 Matthias (Gabriel D’Almeida Freitas), is a handsome lawyer who seems far too mature for the boisterous unattached chums who all converge at a house party in the Québécois countryside. He has a special bond with Maxime (Xavier Dolan), a pretty urchin with a substance-addicted mother (Anne Dorval, bien sur) who is Australia-bound.

When Erica, a mutual friend’s hilariously Americanised little sister, casts Matthias and Maxime in an “impressionistic yet also expressionistic” short, they are required to kiss. It shouldn’t be a big deal. Maxime is gay. Matthias is straight. And they once made out as teenagers. But the kiss sends Matthias into a strange funk of uncertainty. When asked to give a farewell speech at Maxime’s going-away dinner, he can barely string two words together or look at his friend.  Writer-director Xavier Dolan has presided over some eight heartfelt, spirited, queer, daring features since exploded onto the cinematic landscape with 2009’s I Killed My Mother, which he made at the age of only 19.

Matthias & Maxime wears his welcome signature in DOP André Turpin’s playful handheld 35mm framing, his lovely earnest use of pop music (hello Britney Spears), and a monstrous mommy in the margins. As ever, Dolan creates moments of pure, joyful cinema. A scene wherein Matthias throws a spent cigarette stares at a billboard depicting happy Cis folk makes one think of Rock Hudson in a Douglas Sirk melodrama. Rising star Harris Dickinson makes the best Pet Shop Boys soundtracked entrance of the year. Arriving on the back of the mixed reviews received by Dolan’s most recent features (It’s Only the End of the World and The Death & Life of John F Donovan) Matthias & Maxime has been heralded as a “return to form”.

For all its recognisable delights, it feels more contemplative than the rest of the canon. Dolan’s screenplay carefully calibrates his title characters using class, convention, and maternal influences. The use of pained and stifled emotions, as experienced on the fringes of cacophonous parties, makes for a fond farewell to both the excesses of youth and Dolan’s own exuberant, earlier movies. The Québécois auteur, directing himself for the first time since Tom at the Farm, has seldom been as nuanced onscreen. It’s a crowning and delicate performance in a finely wrought drama.

On Mubi from August 28th