Johnny Depp lost his libel trial. But so did Amber Heard

Analysis: Any lingering illusions of Hollywood as a place of glamour and sophistication are gone 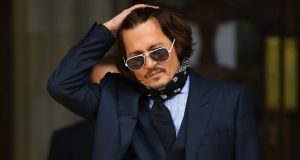 Johnny Depp: Even if he had “won” the reputational cost was going to be colossal. As he lost, it may prove incalculable. Photograpah: EPA/Neil Hall

It’s hard to recall now but there was a time when the most outrageous claim about Johnny Depp involved a London hotel, a supermodel and a bath filled with champagne.

Depp’s libel action against the publishers of the Sun newspaper – which was dismissed by a judge in London this week – may prove to be the moment the public was finally disabused of any lingering illusions of Hollywood as a place of glamour and sophistication.

Over the three-week trial, which took place in London in July, Depp sued the newspaper and its publishers over an article headlined: “Gone Potty: How can JK Rowling be ‘genuinely happy’ casting wife beater Johnny Depp in the new Fantastic Beasts film?”

It referred to claims of violence made by his ex-wife Amber Heard, and the fact that she had sought a restraining order against him in 2016.

It might have been a libel trial, but it played out like an ugly, salacious bare-knuckle brawl. Barristers argued in court over who defecated in Depp’s bed;  whether Heard had an affair with Elon Musk; whether he was violent or she was a fantasist.

The self-described “southern gentleman” Depp was quizzed about his chemical-induced blackouts; his $30,000 a month wine habit; the drugs he started taking at the age of 11. He had to describe how it felt to learn that he had lost $650 million in earnings and found himself with a $100 million tax bill after he was cheated by advisers.

In court, he was shown a photo of himself passed out asleep, with melted ice cream pooling in his lap. His text messages were entered as evidence, including one in which he “joked”, “Let’s burn Amber!”, and others in which he called her a “50 cent stripper” and wished that “karma takes the gift of breath” from her.

It was all a very far cry from baths of champagne.

Even if he had “won” – because there’s no winning in a case like this – the cost to him in terms of reputational damage was going to be colossal. As he lost, it may prove incalculable.

Mr Justice Nicol’s judgment found that the Sun’s story was “substantially true”, on the basis of 12 separate incidents detailed in court.

Depp’s lawyers immediately responded by calling the decision “perverse” and “bewildering” and insisting it was “so flawed that it would be ridiculous for Mr Depp not to appeal.” On top of the appeal, there is another libel trial pending in the US, where he is suing Heard and the Washington Post for US$50 million over an article she wrote.

Of course, it’s not strictly true to say there are no winners. The lawyers will do alright, as will the Sun newspaper, which issued a statement congratulating itself on “campaigning for the victims of domestic abuse for over 20 years” and crusading for press freedom.

As to losers, there are a few. Amber Heard’s version of events may have been vindicated, but she has not emerged unscathed – not during the trial, when she was destroyed on the stand; booed and heckled by the so-called Deppheads who waited outside the court every day; not now when she continues to be harassed and maligned on social media and even to receive death threats.

The simple fact of the matter was that the judge found her more credible than Depp, whose voracious appetite for drugs and alcohol was considered a factor in both his outbursts and his inability to recall them.

Mr Justice Nicol referred to “Mr Depp’s manner when ‘the monster’ side of his personality was dominant.” Heard, the Judge declared, was not “a gold-digger”, as she had been characterised.

Johnny Depp lost his libel trial. But in a sense, so did Amber Heard. It often felt as though she was the one on trial. The judge and the public were invited to consider how much she drank; how difficult a personality she was; Depp’s PA’s assessment of her as a “sociopathic show pony”, a “Machiavellian overlord” and a “talentless c**t”.

Her own former assistant Kate James accused Heard of stealing her own experience of being a victim of sexual violence and adopting it as her own. The judge found that “there was violence on both sides. Ms Heard has accepted that she punched Mr Depp, but it is clear….she was not the sole aggressor”.

It’s worth remembering that Heard had no part in bringing the case, no say in how it was conducted, and was ostensibly only there as a witness. After the trial, she said: “It has been incredibly painful to relive the breakup of my relationship, have my motives and my truth questioned, and the most traumatic and intimate details of my life with Johnny shared in court and broadcast around the entire world.”

Unlike so many of the contrasting claims made in court by both sides, this had the simple ring of incontrovertible truth.

The damage is not confined to Heard. Among those who will suffer as a result of the whole, ugly episode are the victims of domestic abuse who cannot have been encouraged to come forward by the trial or the public reaction to Heard. She may ultimately have been believed by the judge, but in the court of public opinion, she never stood a chance.

The case also shed light, again, on the ugly culture of entitlement in Hollywood that allowed men like Harvey Weinstein to operate their empires of harassment unimpeded. It revealed the invisible, silent army of minders, cleaners and PAs who are the secondary casualties of this toxic industry: the housekeeper, Hilda Vargas, who gave evidence of having to clean human excrement in Depp’s bed; the estate manager in Australia, Ben King, who described finding Depp’s finger tip in the wreckage of one particularly antagonistic row; the countless, nameless hotel staff who had to repair hotel rooms after he put what he called a “few dents” in them.

The public’s relentless appetite to know what A-list celebrities are “really like” fuels an entire industry of celebrity magazines and gossip sites. Often when the curtain is lifted, we wish it hadn’t been.

If we didn’t already know it, this trial has shown again that Hollywood glamour is rarely more than surface deep.