James Bond: Pierce Brosnan says next 007 should be played by a woman 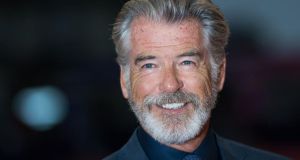 Pierce Brosnan: #MeToo ‘has been relevant and significant and well needed’, so the Bond films ‘will have to address that’. Photograph: Loïc Venance/AFP/Getty

Pierce Brosnan has said it is time for a woman to take on his former role as James Bond.

“I think we’ve watched the guys do it for the last 40 years. Get out of the way, guys, and put a woman up there!” the 66-year-old Irish actor told the Hollywood Reporter. “I think it would be exhilarating; it would be exciting.”

Brosnan added that Bond will have to change with the times. “The #MeToo movement has been relevant and significant and well needed in our society, so they’ll have to address that.”

Filming for the next Bond film – Daniel Craig’s fifth and expected final outing as the British spy – has begun in Jamaica, as well as in London and at Pinewood Studios.

Fleabag’s Phoebe Waller-Bridge is working on the film, No Time to Die, making its women characters “feel like real people”.

There have been reports that the British actor Lashana Lynch will take over Bond’s famous code name after his character leaves MI6 in the new film – but she will not be the next Bond. “It’s a popcorn-dropping moment. Bond is still Bond, but he’s been replaced as 007 by this stunning woman,” a source told the Mail on Sunday.

Speaking at Deauville Film Festival, in France, Brosnan dismissed questions about Roman Polanski’s surprise red-carpet appearance there on Saturday night – the actor and the director collaborated on The Ghost Writer in 2010 – and the selection of Woody Allen’s A Rainy Day in New York as its opening film.

“Mr Polanski and I have worked together; he’s a brilliant film-maker, and so is Woody Allen. We celebrate them as film-makers,” Brosnan said. – PA