Rapman: ‘I want to make young kids not want to pick up a knife’ 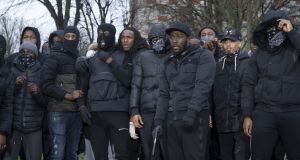 It was late at night and the filmmaker and rapper Andrew Onwubolu – known to his friends and millions of YouTube followers as Rapman – was putting his kids to bed when the call came through. It was Jay-Z on FaceTime.

“I was so starstruck,” says Onwubolu. “He is just there saying: we need to talk business.”

It’s a chilly November morning at the BBC cafe and, dressed all in black, nobody recognises Onwubolu, Hollywood’s new hottest ticket, sitting in the corner. That is unlikely to be the case for much longer.

Last year, Onwubolu made major waves with Shiro’s Story, a three-part rap odyssey and soap opera. It was inspired by a story he’d heard around Lewisham about a local boy who discovers a melodramatic family secret. Actors lip-synched a compelling tale under Rapman’s freestyling rhymes. It’s a brilliant, compelling thing, made for £3,000 from selling cars, and Rapman emerges as formal innovator and outstanding storyteller. He’s always had that knack. He recounts an amazing sounding school essay, written for an entry exam into secondary school in which a man with an axe is rewarded based on the size of tree he chops down in a forest.

“Anytime something would happen in our area I’d meet up with my friends to talk about it,” he says. “And people would say I want Raps to tell because I would always make it a bit more exciting.”

Shiro’s Story has already proved a starmaker, launching the careers of Joivan Wade, star of the The First Purge and the DCEU’s Cyborg and Percelle Ascott, star of Netflix drama The Innocents.

“I wasn’t expecting anything from it,” recalls Onwubolu. “I’m seeing a lot of views in two days but I thought that would slow down. In a matter of days, it had a million views play. By the time the third one was released, it had a million views in five hours. People loved it. I’m seeing my name on Twitter. I’m getting messages from America and Africa and Australia. I was shocked. I’ve made so many videos since 2013. I couldn’t believe it. It was on my laptop for two years before I released it because I wasn’t sure about it. I thought it was okay. But I didn’t think it was my best work.”

On the same night that the BBC were crowing about the record-breaking 10.4 million viewers who tuned in for the finale of the Bodyguard, the first two episodes of Shiro’s Story sailed past seven million views toward a series tally of 18 million views and counting. One of those viewers was Jay-Z; another was Jeffrey Katzenberg, the former chairman of Walt Disney Studios and Dreamworks Animation. Last year, Katzenberg unveiled Quibi, a new streaming platform that will specialize in original, short-form content designed for smartphones. Having watched Shiro’s Story, he flew Onwubolu to Los Angeles, hoping to sign him into a starry stable of Quibi filmmakers that includes Steven Spielberg, Guillermo del Toro and Jennifer Lopez.

But the budding filmmaker had his heart set on Blue Story, a lightly autobiographical epic based on Onwubolu’s teenage years.

“They offered me a contract straight away,” says Onwubolu. “At the same time I’m getting chased up by the Blue Story producers and they need my signature. I would get more money out of the Hollywood thing. But Blue Story was so close to my heart. And they said: well, go do the movie and when it’s over come back.”

It was a good call. Blue Story is one of the year’s best films and an urgently needed look into London’s postal code rivalries. It arrives in cinemas with the clout of BBC and Paramount Pictures behind it.

“They have been really supportive,” says Onwubolu. “They really see it the way I see it and I love it the way I love it. They are getting really behind it; it’s not just getting the bare minimum. It’s all over London. The other day at my daughter’s school, the buses came to pick up the kids and every single double-decker coming to the school was a Blue Story bus and the whole school starts screaming. It makes me so happy that my kids are proud of me. In my life, I wasn’t always doing things that they could be proud of.”

Blue Story concerns a friendship that is threatened by local rivalries within London’s blue signage streets; hence the title. Timmy (played by the director’s son, Stephen Odubola) is best friends with Marco (Micheal Ward, star of Netflix’s Top Boy reboot) and are seldom apart at their secondary school in Peckham. Unhappily, Timmy is from another borough and is commuting, at his mother’s insistence, from a no-go area. It all kicks off when one of Timmy’s childhood friends beats up Marco, infuriating Marco’s older, angrier brother Switcher (Eric Kofi-Abrefa) who is the leader of the Peckham gang. Timmy, meanwhile, has fallen for fellow student Leah (Karla-Simone Spence), but all of the teens are impacted by escalating tensions.

“I went to school in Camberwell which is basically right next to the Peckham and I lived in Deptford which is in Lewisham and the two areas were in a massive gang war at the time,” explains Onwubolu. “I didn’t know that as a kid. It was only in secondary school when I had group of friends and you’d go round to their house and the older brother or friend would say: so who’s this one; never seen them before. A lot of people were getting stabbed and shot in those years. There are still some personal rivalries but that gang rivalry doesn’t exist anymore. So there are some scenes that are from my personal experiences but they happened to friends of mine.”

Blue Story marks a shift away from Rapman’s Greek Choral style but, at the insistence of producer Damian Jones (who previously presided over the Kidulthood trilogy), there is some rapping, as the writer-director wanders into the frame.

“I originally didn’t want any rapping in it,” says Onwubolu. “It was a traditional script. But Damian Jones my producer, he really wanted rapping. So it’s not like Shiro’s Story. It’s not an hour and a half music video. But I think it works because you get a little bit of what you want and you get a traditional film.”

The rapping, as it happens, sits really well in what is a very impactful teaching film. “It has important messages about peer pressure and standing up to gangs,” says the director. “I want to make young kids not want to pick up a knife and not want to fight for your area. You’re not getting paid; you’re not going to get anything out of this. I hope some kids can see that from the film.”

Making Shiro’s Story, Onwubolu worked guerrilla-style, sometimes for 17-hour days, with actors occasionally doubling as crew on the fly in Lewisham. With Blue Story, which expands on Rapman’s first 2014 YouTube hit series of the same name, he had a budget of £1.3 million. And still he found himself cast out of Lewisham, as the local council under orders from the London mayor’s office, refused to support projects depicting knife and gun crime. It didn’t matter that Blue Story is cautionary. At the 11th hour, the crew was given permission to film in Enfield, north London, a stand-in that scans.

“The dream was to shoot in south London,” says Onwubolu. “But we had one more week to go. So we were very lucky.”

Blue Story arrives hot on the heels of two much-admired BAME pictures, The Last Tree and Farming, and Netflix’s popular Top Boy revival. Things are, notes Onwubolu, a little healthier than a decade ago when Noel Clarke’s trilogy offered a rare opportunity to see black Britons on the big screen.

“The realities of life in the UK is all over the papers but it’s not reflected on TV,” says Onwubolu. “You can hear in music. So it’s film and TV that needs to catch up. I want the film to do well for my own reasons, so I can say I have a successful movie. But I also want to make things easier for the next kid with a script. I’m hoping they’re going to want more stories like this.”

Onwubolu has acquired another famous fan in recent weeks. “Jeremy Corbyn followed me the other day on Instagram and I said: ‘Thanks for the follow; you guys should come and see this film if you really want to tackle knife and gun crime in the UK. You need to get in there before they pick up a knife.’ They seemed really interested so I’m hoping they come to the premiere.”