James Bond 25: title and cast to be revealed Thursday

The 25th Bond film, directed by Cary Joji Fukunaga, will be Daniel Craig’s fifth outing as 007 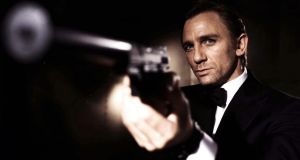 Daniel Craig: Bond 25 is expected to be the last time he play the spy. Photograph: PA

The title and cast of the forthcoming James Bond film will be announced on Thursday.

A tweet from the official 007 account on Wednesday said: “Coming tomorrow at 13:10 GMT, the #BOND25 Live Reveal from an iconic 007 location. Ask the cast a question using #BOND25

The 25th Bond film, directed by Cary Joji Fukunaga, will be Daniel Craig’s fifth outing as 007.

It is expected to be Craig’s last time playing the spy, having previously starred in Casino Royale, Quantum Of Solace, Skyfall and Spectre.

The rest of the cast has not yet been announced but recent Oscar winner Rami Malek is among the stars rumoured to be joining the production, while Ben Whishaw, who plays Q, and Ralph Fiennes, who plays M, have said they will return.

Fukunaga stepped in as director when Danny Boyle dropped out over “creative differences”.

The film has reportedly been operating under the working title Shatterhand, a reference to the original Ian Fleming novels where Bond and his nemesis, Ernst Stavro Blofeld, first appeared.

Blofeld used the alias Dr Guntram Shatterhand in the 1964 novel You Only Live Twice, which follows Bond to Japan where he finds his arch-enemy living under that name, hinting at the setting and basis of the new film. – PA