Alex Gibney: ‘I think he is still angry at Putin. I think there’s a burning fury in him’ 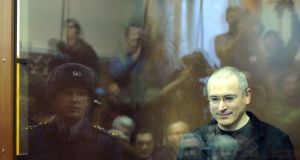 Mikhail Khodorkovsky behind a glass wall at a courtroom in Moscow in December 2010 on embezzlement charges relating to his oil company Yukos. Photograph: Alexander Nemenov/AFP via Getty Images

Alex Gibney is a busy man. His six-part documentary series Why We Hate, executive-produced by Steven Spielberg, just premiered on the Discovery Channel. His documentary The Inventor: Out for Blood in Silicon Valley – investigating the now-defunct Theranos company and its founder Elizabeth Holmes – premiered at this year’s Sundance. And here comes his newest film, Citizen K, which – following on from Going Clear: Scientology and the Prison of Belief, Steve Jobs: The Man in the Machine, and his investigation into the 1994 Loughinisland massacre, No Stone Unturned – is his fifth feature in four years.

Citizen K is a portrait of Mikhail Khodorkovsky, a man who went from being the richest man in Russia to spending a decade in prison for corruption. Those charges were viewed by some as a punishment for challenging Russian president Vladimir Putin’s power. (The European Court of Human Rights, which heard Khodorkovsky’s appeal, found that the charges against him were grounded.) He is currently living in London as one of Putin’s most vocal critics. He is no longer ranked 16th on Forbes’ list of billionaires but, on camera, he discusses the lifting of a freezing order on almost €100 million in Irish-based assets as if he had found some loose change down the back of the couch.

“A lot of people just despise him,” says Gibney. “I came to the story in 2016 and I realised in the wake of the Russian attack on the US election that I knew very little about Russia and wouldn’t it be interesting to know more.

“Right around the same time I was approached by two of my producers, John Battsek and PJ van Sandwijk, who had made contact with Khodorkovsky and who had been interested in his story for some time. It is a great story because it’s somebody who came from nothing who became, arguably, the most powerful man in Russia and then became utterly powerless except for the ability to take his own life. I’ve made a lot of films about power and abuses of power and this was an interesting way of looking at power in Russia.”

The chaos of those early capitalist years has given way to a new kind of chaotic political theatre. Gibney was keen to interview Vladislav Surkov, the key Kremlin figure who, according to Adam Curtis’s HyperNormalisation, is the chief architect behind the theatrics that have kept Putin and his successors in power since 2000. Ultimately, he had to make do with a circus that includes Ksenia Sobchak, who ran against Putin in the most recent presidential race. She may also be his goddaughter and her campaign may, says Gibney, have been backed by Putin. The theatrics, claims the filmmaker, know no borders.

He was initially very distant and very hard to penetrate. He speaks in grand abstractions and riddles

“It’s like the title of Peter Pomerantsev’s great book: Nothing Is True and Everything Is Possible,” says Gibney. “You go down a rabbit hole and you don’t know what to believe. It’s a weird environment. Putin is good at projecting strength. But, like so much of life in Russia, I think that strength is theatre.

“Yes, they have nuclear weapons, but the economy is overly dependent on natural resources. They have a huge brain drain. Young people are desperate to get out of the country. When you consider the cyber attacks on other people’s elections and the interference with democracy elsewhere, this is a way of projecting grand influence on a grand scale. But it’s kind of like what Eisenhower used to do with the OSS [Office of Strategic Services] and the CIA back in the 50s. It was regime change on the cheap. What Putin tries to do and what Surkov tries to do is to sow chaos everywhere so that Russia can look strong.”

Using extensive archive footage from the BBC – much of which has not been screened before – and eight days spent interviewing Khodorkovsky on camera, Citizen K offers a breathtaking account of the smash-and-grab era of Boris Yeltsin and the USSR’s privatisation racket, whereby Khodorkovsky and his fellow oligarchs hoovered up the valuable share certificates that had been given to ordinary Russians. That and other wild west capitalist scams allowed Khodorkovsky to acquire around 20 per cent of the state’s oilfields, unified under the name Yukos, and a personal fortune of aboutd $15 billion. His smirking account of this period puts one in mind of Hamlet’s characterisation of Claudius.

“It is overbearing,” admits Gibney. “But over time I came to realise the smirk could mean three or four different things. It could be an actual smile while making a joke. It could be sarcasm or something darkly comic. It could be full of steel, a way to tell you that if this goes the wrong way I can get very angry.

“He was initially very distant and very hard to penetrate. He speaks in grand abstractions and riddles. But he’s an interesting guy. He’s not a Ferrari and hookers and blow kind of oligarch. He’s a dedicated family man. He loves cats. He’s addicted to machines and technology. In fact, while he was in jail, his wife tried to smuggle in an iPhone. It was considered the best gift that they could give him even though the battery would surely run out in eight hours.

“And sitting down with me over eight days, there wasn’t a question he didn’t answer. Sometimes he answered in ways I thought was inaccurate, but he always engaged. I don’t think that would have happened with another oligarch either, because they’re taking instructions from Putin or because they are arrogant. So I came to like him.”

There’s a moment where he pauses and his eyes roll back into his head. It’s like something out of The Exorcist

Citizen K is, as Gibney amusingly puts it, “a tale of two bros” in that Khodorkovsky’s rise is mirrored (and later inverted) by Putin’s own ascension. As with Surkov, the director had hoped to interview the Russian president.

“I went to the Kremlin and met  [press secretary] Dmitry Peskov,” says Gibney. “I wanted to speak to Putin but I would have settled for Peskov himself. But no.”

“When I was trying to figure out who I was going to talk to, they had to be what I call two-fors,” says Gibney. “They had to be people who had some perspective on our story and who also had a broader perspective on Russia. I didn’t want to interview experts. The idea was to find characters. I believe that documentary interviewees should be characters and not just mouthpieces.”

Citizen K lightly questions Khodorkovsky’s alleged involvement in the murder of Vladimir Petukhov, the mayor of Nefteyugansk, the town where Khodorkovsky’s oil company, Yukos, had its headquarters. But one can’t help but wonder if Gibney buys into his subject’s prison transformation from fallen oligarch into defender of democracy. Khodorkovksy promised Putin, ahead of his 2013 release, that he would leave Russia to spend time with his family and would stay away from politics. But a 2014 interview with The Guardian depicted a man hellbent on revenge. And since that time he has railed against Putin from abroad via his Open Russia foundation. Is it political or personal for Mikhail Khodorkovsky?

“I think you have to separate the conversion out,” says Gibney. “Let’s talk about the anger first. I think he is still angry at Putin. I think there’s a burning fury in him. But I think he’s working on it. There’s an interesting moment in the film when he is interviewed right after he gets out of prison and he is asked if he feels angry at the people who put him in prison. And he says something really weird. He says ‘it would be a sin against the truth to say that I didn’t have some feelings about the matter. But I am working on myself.’ So there’s a moment where he pauses and his eyes roll back into his head. It’s like something out of The Exorcist. He’s trying to purge the demon, right. So there’s an element of the prison conversion that I really do buy. He realised that if he stayed furious the entire time, he it would eat him alive and that he had to take a longer view.

“Let’s, just for kicks, compare him with another oligarch. Imagine Trump spending eight years in an American prison and writing things like Khodorkovsky writes: ‘Life is not about having, it’s about being’ or ‘I’m not an ideal man but I am a man of ideals’. It doesn’t excuse what happened in the 90s but I believe he thinks about himself and the world differently.”

Robert Eggers on bringing Robert Pattinson to The Lighthouse
7