It’s indulgent, disordered and wildly up itself. But you shouldn’t miss it 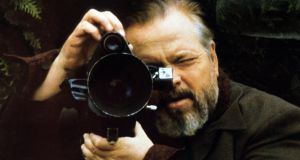 Orson Welles: The Other Side of the Wind remained his most discussed unfinished film. Photograph: Apic/Getty

Towards the close of They’ll Love Me When I’m Dead, one vessel in the Orson Welles flotilla that has just docked at Netflix Cove, the great man ponders his then unfinished oddity The Other Side of the Wind. “Suppose during the course of the picture it turns out that it’s more interesting hearing the actors and myself talk about it than making the picture,” he says during the documentary. “That will be the picture!”

For all his foresight, Welles could not have predicted that, 33 years after his death, fans would be able to access all this material online: a first full version of The Other Side of the Wind, the feature documentary on the film and a 40-minute extra on its recovery and restoration.

It is, nonetheless, tempting to read that remark as a prescient review of the current batch of releases. Maybe The Other Side of the Wind – baggy, fluid and buttock-clenchingly of its time – is more interesting to talk about than to watch. Anybody with even a passing interest in cinema history will find A Final Cut for Orson, the extra, which is hidden in the “trailers” section of the main feature, packed with diverting revelations on the painstaking restoration. The negative arrives from Paris in a crate the size of Gibraltar. Editors devise programmes to digitise the footage. The veteran Michel Legrand is drafted in to provide a delicious jazz-infused score. It’s a sort of miracle.

It’s hard to imagine what any hitherto uninterested viewer might make of the thing. No Welles enthusiast will, however, want to delay immediate immersion

The feature documentary, They’ll Love Me When I’m Dead – presented by Alan Cumming in baffling received pronunciation – works the too-familiar story of Welles’s many tribulations into a study of his most famous late experiment. We all know how Hollywood failed to accommodate Welles after his precocious triumph with Citizen Kane. The Magnificent Ambersons, his follow-up, was butchered while he shot a documentary in South America. The current documentary argues that it was Touch of Evil, a famously dark, much-restored crime thriller, that finished him off with the studios. Welles was thereafter doomed to plod Earth seeking funding for films – Chimes at Midnight, The Trial – whose haphazard production schedules only added to their agreeable oddness.

The Deep, his take on the novel that later generated Dead Calm, with Nicole Kidman, came frustratingly close to completion. A version of his adaptation of Don Quixote exists. But The Other Side of the Wind remained his most discussed unfinished film.

Shot in the mid-1970s, the picture concerns Jake Hannaford, an ageing film director hosting a grand birthday party as he struggles with the final cut of a film called (yes) The Other Side of the Wind. Welles’s great pal John Huston played the central character. Other friends and associates played themselves, versions of themselves or versions of other people.

Welles saw Hannaford’s The Other Side of the Wind as a painting sitting within a cinematic frame fashioned from the action at the birthday party. It sounded indulgent, disordered and wildly up itself. So it has proved. But the picture is so furiously engaged with its own flaws that it proves easy to forgive.

It’s hard to imagine what any hitherto uninterested viewer might make of the thing. No Welles enthusiast will, however, want to delay immediate immersion. The party sequences comprise an early example of a “found footage” art film: The Blair Witch Project on holiday with 8½. Welles asks us to accept that we’re watching the documentary footage shot by various film-makers gathering around the great man on his special day. Some are in colour. Some are in black and white. Gauges are various. (None is shot on video. How delightful that a Netflix release should be this promiscuously filmy.)

The layers of irony are so thick that one occasionally finds oneself gasping for air. Without helpful glosses from They’ll Love Me When I’m Dead, the viewer could be forgiven for feeling that the film within the film showed evidence of high pretension and male-gaze disease. A young man (Robert Random) and a young woman (Oja Kodar, Welles’s partner and cowriter) faff randomly about parts of southern California. As was the case at the time, they are much in the presence of faux Tiffany lampshades. They both end up in the nude, but the woman shows many more of her exposed bits.

Isn’t this sort of awful?

Yes. Welles confirms in the documentary that he was trying to fake a film as far outside his own sensibility as possible. This inner The Other Side of the Wind is, in fact, a pitch-perfect parody of contemporaneous films by Michelangelo Antonioni such as L’Eclisse and Zabriskie Point. Welles had no time for that director’s work. “According to a young American critic, one of the great discoveries of our age is the value of boredom as an artistic subject,” he said in 1967. “If that is so, Antonioni deserves to be counted as a pioneer and founding father. His movies are perfect backgrounds for fashion models.” The influence remains. Hannaford’s vacuous The Other Side of the Wind also suggests the scenes from Terrence Malick’s The Tree of Life where Sean Penn stares at masonry in deserts.

There’s an awful lot of toxic masculinity in the outer sections. Although Hannaford has reached an artistic impasse – a projectionist wonders if anyone cares what order the reels are ordered in his dumb masterwork – he still radiates all the charisma at Huston’s disposal. Listen to the words, however, and it becomes clear that the film is wise to the fraudulence of the Hemingway stance. “Bull fights. Big game. All the macho bullshit,” someone says.

Hannaford’s film ends (this can hardly be a spoiler) with the woman stabbing a huge, inflated penis into flaccidity. The scene is simultaneously pretentious and very much to the immediate point.

Everywhere you look, icons of the post-1960s hangover are being dissected and ridiculed. Susan Strasberg turns up as an only modestly unkind version of Pauline Kael, the film critic, who had recently accused Welles of exaggerating his contribution to the script for Citizen Kane. Gregory Sierra apes the swagger of the supermacho film-maker John Milius. Geoffrey Land seems to be spoofing the producer Robert Evans.

No amount of ironic gesture, cultural commentary or self-conscious wit can conceal the near-fatal shapelessness of ‘The Other Side of the Wind’

Most twisty and head-spinning of all are the many contributions from Peter Bogdanovich. The young film director, who had befriended and defended Welles, turns up as the most attendant of Hannaford’s successors. Bogdanovich inherited the role from the impressionist Rich Little, and took the opportunity to work in a few of his own famous vocal takes on cinema professionals. Huston can’t help but shoulder some of Welles’s tragedies and tyrannies. Bogdanovich, torn between apostle and disciple, can’t help but be himself.

Forty years later, when the restoration finally kicked into gear, the director of The Last Picture Show and Paper Moon became one of the team’s most valued consultants. He’s there throughout They’ll Love Me When I’m Dead and A Final Cut for Orson. He helps create the sense that this trio of films forms one collective project blurring documentary, mockumentary and deranged art-house indulgence.

All of which is a way of saying that the thing itself is worth savouring. It may not be entirely a “film by Orson Welles”, but it’s close enough to deserve serious attention. Such interest will reveal gaping inadequacies. No amount of ironic gesture, cultural commentary or self-conscious wit can conceal the near-fatal shapelessness of The Other Side of the Wind. It has a beginning and an end, but its middle could be rearranged in many different orders without altering the effect. (Remember the projectionist’s comments about the inner film.) That may only spur greater attention. What a feast for Orsonions.

The Other Side of the Wind, They’ll Love Me When I’m Dead and A Final Cut for Orson are all streaming on Netflix