Review: Steve McQueen tries to cram in too much good stuff – but there's no crime in that when it's such good stuff 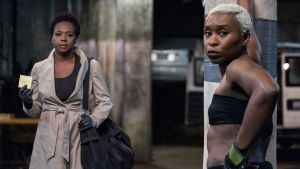 Steve McQueen’s career continues to defy plausibility. The Londoner first gained fame for a string of avant-garde gallery pieces that eventually won him the Turner Prize. Not many folk from such a background make a career on the big screen. Hunger was a critical smash. 12 Years a Slave won best picture at the Oscars. Now he directs a funny, twisty, ballsy adaptation of a Lynda La Plante series from the biggest-haired end of the 1980s.

Odder still, despite all the mainstream clutter, McQueen manages to remain the same man who once walked tall among the famous (notorious?) Young British Artists. Two sequences in particular exhibit a bravura, self-contained oddness that would work well in gallery spaces. The camera sits on the bonnet of Farrell’s car and, in one unbroken shot, follows him all the way from a meeting in the ‘hood to his palatial mansion. A hoodlum beats up a contact in a bowling alley to the strains of Van Morrison’s Madame George. No influences are apparent other than McQueen’s upon himself.

There is too much secondary plot to summarise effectively, but the spine remains unchanged from La Plante’s series. Scripted by Gillian Flynn, author of Gone Girl, the picture pitches Davis as Veronica Rawlins, Chicagoan widow (if you will) of recently slain hoodlum Henry Rawlins (Liam Neeson in flashback). Henry’s last job involved the lifting of several million dollars from African-American gang-lord Jamal Manning (Brian Tyree Henry). The money got burned up in the shootout that killed Rawlins, and Jamal, who is trying to break into politics, wants every cent reimbursed. Veronica seeks out the other widows from the heist and plans another audacious robbery.

Let’s be honest. There have been few so enjoyable films that have made so little sense. None of the gang has any direct criminal experience and none seems qualified to jump headlong into such a dangerous operation. Alice (Debicki) is a particularly hopeless case. Left stranded after the death of her unlovely husband, she is now controlled by an even more awful mother (brilliant Jacki Weaver in a role that sweats cask-strength La Plante) who demands that she become a call girl.

These are the people Veronica picks for her posse?

The subplot involving Duvall and Farrell allows the former to juice up a delicious Trump surrogate (expect many more of those) and the latter to exercise the oilier end of his charm (always a hoot), but – like much else in the picture – it feels clumsily bolted on to a sleeker superstructure.

Oh well. The film is so beautifully made, so energetically acted and – not McQueen’s forte to this point – so consistently funny that these flaws hardly matter. There is not a dull sequence throughout the considerable running time. A special Oscar should go the way of Viola’s loyal dog who, early on, is put in an indecent degree of peril. Daniel Kaluuya is more frightening than we thought possible. The picture manages to squeeze in an economic gesture towards the concerns of Black Lives Matter.

In short, we have rarely been so indulged with such a generous overabundance of sometimes-unconnected pleasures. There are worse faults than cramming too much good stuff into an insufficiently enormous package.

Allow yourself to be swallowed up.