Mike Leigh: ‘Brexit was a terrible manipulation of people and their needs’

The director on why he's telling the story of a very British massacre, disagreeing with Jeremy Corbyn and avoiding 'thick actors' 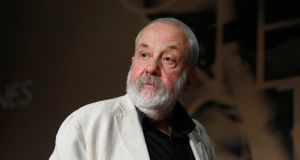 Mike Leigh has a reputation for not suffering fools gladly (a euphemism if ever there was one). I can’t say I’ve any direct evidence to support this legend. He has always endured your current fool with equanimity and, on the morning we speak, he is bordering on the effervescent. Peterloo, his study of a notorious massacre in 19th century Manchester, has just premiered in that city to much hoopla.

“It was great,” he bubbles. “The idea of a London Film Festival screening in Manchester was a great one.”

Does Leigh still see himself as a Mancunian?

“If I were to ask you would you still regard yourself as Irish you’d laugh, right?” he says. “I have lived in London since I was 17 in 1960. But once a Mancunian always a Mancunian.”

If you are dramatising historical events you can read all the books you like . . . But you have to bring that to life

Leigh employed his usual improvisatory techniques to devise Peterloo. No word of the script was written down before the actors entered the rehearsal space. We get insights into everyday working people’s lives. We also get a lucid explanation of the pressures that drove hundreds to an assembly demanding reform in parliamentary representation.

“When we were working on it a cross-section of people from Manchester – of all ages – told us they never knew about it,” he says. “I grew up 15-or-so minutes from where it happened. The primary school could have marched us down there and showed us the area and had us back in school by lunchtime. My dad was a socialist and I don’t remember him mentioning it at all.”

Leigh goes on to explain that, after later reading about the Hussars’ slaughter of 15 protestors in St Peter’s Field, he felt that Peterloo would make a good subject for a film. “But it didn’t occur to me that person would be me because I then only did contemporary films,” he says.

There is logic in that. Finding his groove with a series of wonderful plays for the BBC in the 1970s – Nuts in May and Abigail’s Party among them – Leigh developed a technique that ultimately delivered intimate, fully devised movies such as Naked, Secrets & Lies and Vera Drake. To the outsider, it sounds tricky to use such techniques with historical subjects. The facts are already the facts. Yet Leigh has adapted admirably with Mr Turner, his recent study of artist J M W Turner, and with the current project.

“If you are dramatising historical events you can read all the books you like,” he says. “That will tell you what happened. But you have to bring that to life. I simply applied these techniques we’d invented to these situations.”

Some things have changed in Leigh World. Who would have expected to see the Amazon logo before one of his films? Peterloo was, indeed, produced by the streaming giant and he has nothing bad to say about the relationship. What about the streaming revolution in general?

“That is just the march of history,” he says. “I still have a collection of CDs. I am listening to music on those. What I am not doing is listening to music on wax cylinders. We used to shoot all our work on film and I was militant about it. Peterloo and Mr Turner were shot digitally. And, as far as Peterloo goes, the use of CGI has given us a massive inspirational bonus. We couldn’t have done this without that technology.”

The bicentennial of the Peterloo Massacre lands next year. That drove the project forward. But Leigh was also inspired by parallels with current political discontents.

“I never say to an audience: ‘Think this’,” he says. “I leave you with things to deal with. Obviously it’s about democracy. It’s about power at one end of the spectrum and the have-nots at the other. It’s hard for me to itemise what those resonances are. But it does seem to ring a few bells."

Democracy is still under threat.

Disputatious waves really do seem to be troubling the United Kingdom (as we can still just about call it). As we speak, the news is clogged up with yet more confusion about Brexit. Asked his views on the subject, Leigh drops into exasperated rhetorical questions.

I don’t know. Surprise me, Mike.

“It is ridiculous. It’s irresponsible. It’s mad,” he says. “Boneheads say: ‘But isn’t Peterloo about people wanting the vote? They had a referendum, they voted for what they wanted.’ But Brexit was a terrible manipulation of people and their needs. We know that it progresses nowhere on a daily basis. It’s a disaster. It is truly lamentable. What’s going to happen with the Irish Border? You don’t know the answer to that.”

What about Jeremy Corbyn? The Labour leader – who campaigned against the EU for decades – has been less than vociferous in his opposition to Brexit. What does Leigh make of him?

“I don’t know the answer to that,” he says. “In my heart I think it’s great to have a pure and proper socialist leading the party. I didn’t agree with him on Brexit. But I don’t know where he’s going. I look forward to seeing where he does go when he has the power to actually do something.”

There are no careers in cinema quite like that of Mike Leigh. Raised as the son of doctor in Salford, he became interested in drama at Grammar School and, much to his surprise, eventually won a scholarship to Rada. We could imagine an alternative universe in which Leigh – famously bearded and hangdog of face – became one of the nation’s great character actors. But he admits that he never had the slightest interest in acting. He went on to Camberwell Art School and the National Film School.

“I wanted to make things: do plays, make films. Those things are a fantasy at the age of 17,” he says.

Like his contemporaries Ken Loach and Stephen Frears, Leigh got an early start in cinema – Bleak Moments from 1971 – and then moved towards the BBC when the British film industry slipped into a decade-long hiatus. That work is still remembered fondly. The broadcast of Abigail’s Party, starring his then wife Alison Steadman as the hostess from Hades, generated a storm of approval in 1977.

“You had total freedom. I would go in and say: ‘I can’t tell you what it’s about. There isn’t a script’,” he remembers. “We wheeled the stage production of Abigail’s Party into the studio mainly because Alison Steadman was pregnant with my now 40-year-old son Toby Leigh. So we did it on the box. It was very successful because it went out when there was an ITV strike and there was something very highbrow on the other channel. So 16 million people watched it. Again, total freedom to do that.”

Leigh was one of those who helped engineer a renaissance for British cinema in the 1980s. He returned to the big screen with High Hopes in 1988. Secrets & Lies secured five Oscar nominations and took the Palme d’Or at the 1996 Cannes Film Festival. He was now an oak of his generation. I wonder if he has found any time for professional regrets.

“I don’t know. Not off the top of my head,” he says. “You look at earlier work and you think: maybe that was a bit crude. But that’s not what you’re talking about. That’s just craft. I know film-makers who say: ‘I can’t watch that film of mine.’ I don’t think I have that problem. I don’t look at them every night like Gloria Swanson in Sunset Boulevard. Ha ha! But I can watch them because I like them. Often, with other film-makers who have that problem, it’s because they haven’t made the film they wanted to make.”

He explains that he has managed to emulate the approach of a novelist or a painter. Unlike those artists, however, he does have to work with collaborators. Dick Pope’s cinematography on Peterloo is gorgeous. The acting is as excellent as ever. It must take a particular brain to cope with the Mike Leigh technique.

“Yeah, I don’t work with thick actors,” he says. “There are plenty of them out there, but none of them have been in my films. Heh, heh!”

What was that about suffering fools?

High Hopes (1988): Leigh returns to the cinema with a study of an extended working-class family in north London. A savage (if not always subtle) indictment of high Thatcherism.

Secrets and Lies (1996): Marianne Jean-Baptiste picked up an Oscar nomination for her role as a young black woman, adopted at birth, who discovers that her mum is the equally Oscar-nominated Brenda Blethyn.

Vera Drake (2004): Stunning performance by Imelda Staunton as a woman who provides abortions in 1960s London. Rejected by Cannes before going on to win the Golden Lion at Venice.

Peterloo is in cinemas on November 2nd