Amy Seimetz: ‘I like laughing out really dark things’

She Dies Tomorrow has been described as the ‘pandemic movie of the moment’ though it was made well before Covid, explains the director 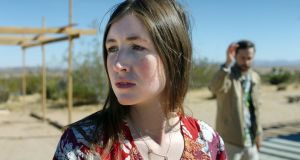 Every second title in recent months seems to have been framed by critics and viewers as a commentary on – or at least somehow adjacent to – Covid-19 or quarantine. Amy Seimetz’s anxious third feature, She Dies Tomorrow, is hard to beat in this respect.

The apocalyptic thriller was due to premiere at the cancelled SXSW film festival last March. The film’s virtual release has been sounded by such headlines as “Amy Seimetz accidentally made the first Covid-era thriller” (Indiewire) and “Steven Soderbergh and Amy Seimetz made the pandemic movies of the moment” (New York Times).

“I made it before – obviously – so it’s interesting,” laughs Seimetz via Zoom from her Los Angeles home. “The interviews I’ve done for the film are extremely personal because of the nature of the film but also because of Covid because everyone is going through isolation and some of these other things I was exploring in the film. So it’s been very surreal but at the same time I am enjoying the interviews because they’re much more personal.”

She gestures around the room. “And to add another metalayer in, I shot the movie in my house. The main character’s name is Amy. And now I’m doing interviews sitting in my house. And I like that because in my work I really like feeling like you’re spying on people. Like you’re not supposed to be there.”

She Dies Tomorrow opens with the director’s longtime collaborator Kate Lyn Sheil wandering around her empty LA house, drinking wine and listening to Mozart’s Requiem over and over. Sheil’s character Amy is a recovering alcoholic. When her friend Jane (Jane Adams) comes to check on her, Amy tells her: “I’m going to die tomorrow.”

Jane, too, becomes infected with the same creeping dread and passes it to her brother (Chris Messina) and his wife (Katie Aselton), who infect their dinner guests (Tunde Adebimpe and Jennifer Kim). Soon even strangers, including Michelle Rodriguez and Josh Lucas, have succumbed to a sense of impending doom.

Each responds to the contagion differently. Jennifer Kim bemoans the months spent in a relationship that she should have left; Jane visits a doctor; Amy, determined to be useful in death, commissions her corpse to be made into a leather jacket.

“The initial idea was born out of my own anxiety,” says Seimetz. “And trying to scratch and capture something that that’s close to a panic attack: that flutter of anxiety that transforms into something like operatic chaos and then the comedown. But when we are making a film we were laughing the whole time because I really like laughing at myself and I like laughing out really dark things. I always find humour in things and that’s very therapeutic for me.

“Making the film, we shared that existential dread and the cathartic elements. So we could poke fun at each other for being indulgent with our own anxiety.”

The humour manifests in various zombiefied encounters and wild about-turns. Josh Lucas’s doubting doctor flips from scolding Jane to needing a lie down as the contagion hits. The punctured melodrama adds to She Dies Tomorrow’s weight as an intriguing corrective to how death is portrayed in American cinema, a medium where it generally exists either as a glossy dying young narrative or a gruesome spectacle.

“It’s almost always all about the violence and you ignore the weight of death when it’s reduced to a body count,” says Seimetz. “Then the other side of it is so melodramatic. I do like watching those and movies in an indulgent way just to get my cry on. But when you experience death in your life it’s a lot more like Four Weddings and a Funeral. Because it’s really sad and your emotions are so raw, the juxtaposition of the tragedy and something funny or random becomes absolutely hilarious.”

Seimetz began making films when she was 18, in her native Tampa-St Petersburg area. At film school she met future Oscar-winner Barry Jenkins. She already had credits on seven short and experimental films when she produced Jenkins’ debut feature, Medicine for Melancholy, in 2008. Seimetz made her way to Los Angeles, where she met the experimental filmmaker James Benning and the cinematographer Jay Keitel. She supported herself by working as a nanny and a waitress. She taught herself how to sew and worked as a seamstress.

Almost a decade has passed since the Hollywood Reporter singled Seimetz out as “one to watch”. “Every year, the Sundance Film Festival has a semi-official “it girl” who encapsulates the festival’s cocktail of discovery and buzz,” wrote the Los Angeles Times. “But what about someone who embodies the independent film world’s sense of community and the pitch-in spirit of collaboration, something like a most valuable player? That prize might well go to Amy Seimetz.”

Sure enough, Seimetz has subsequently wracked up dozens of credits in sound and costume and camera departments, in addition to her output as an actor, producer, writer and editor. In 2012 she began to write, direct and executive produce two seasons of the Starz series The Girlfriend Experience and direct two episodes of FX’s Atlanta.

“With TV you have an audience automatically; it’s built into the structure of it,” says Seimetz. “And you roughly know who that audience is going to be depending on the network. You know who you’re speaking to. You know what you are getting into with the writing. With independent film you have no idea. People say I’m making the movie for myself. And that’s 50 per cent of it but it’s way too expensive and way too much effort to just make a movie for yourself. It’s a public medium so people are gonna be watching it ideally. So if you can consider work a conversation, then I’m going to have to start the conversation.”

Seimetz has become almost as well known for her work as an actor, appearing in Pet Sematary and Ridley Scott’s Alien: Covenant. She used her earnings from the former to finance She Dies Tomorrow. In 2013, She Dies Tomorrow star Jane Adams suggested Seimetz for The Killing.

That’s typical of the cool indie nexus that Seimetz occupies. There are at least half a dozen filmmakers – including Chris Messina, Katie Aselton and Adam Wingard – with speaking parts in She Dies Tomorrow. Other Seimetz collaborators include mumblecore king Joe Swanberg and Christopher Guest who hired her for a recurring role on HBO’s Family Tree.

Typically, she can be found doing just about anything on the set of a micro-budget feature involving such like-minded multi-hyphenates as Lena Dunham (Girls, Tiny Furniture), Alex Ross Perry (Her Smell, Listen Up Philip), or David Robert Mitchell (It Follows, Myth of the American Sleepover).

“It all feels so organic,” says Seimetz, who had called various friends and invited them to make something before she had a firm idea for She Dies Tomorrow. “I’m not quite sure why that happened with our generation but I think I kind of know. I went to school with Barry [Jenkins] and his producer and I helped produce Barry’s first full feature. I went to school with David Robert Mitchell at Florida State at the same time too.

“What is interesting is that there was a tonne of people at FSU at that time. But Alex Ross Perry and Kris Rey and Lena Dunham and – I’m missing some people here – we were all different parts of the country. Adam Wingard was in Alabama. But we all met at SXSW and all these different festivals and panels. And we all came together and we all have the same spirit of whatever it takes to get the movie done; I’ll come and hold boom for you. I’ve held a boom many times! Or I’ll be a camera operator or I’ll act for you. And everyone had that spirit.

“So it seemed organic but I also think there’s something about our specific age group. We’re a generation of filmmakers who learned on film. But the introduction of the digital age and the accessibility of that technology gave us all these tools that are so much less expensive. And that made it possible for us to do this on our own.

“Having to get a budget for 35mm was so daunting for so many years. So we were the crosshairs of film transitioning into digital. And that allowed us to be really scrappy and do it on the cheap.”

She Dies Tomorrow is on Curzon Home Cinema, BFI Player and Digital Download from August 28th

Óró…: This immersive production is a feast for the senses
6

Óró…: This immersive production is a feast for the senses
Real news has value SUBSCRIBE