Irish films in the mix at Venice and Toronto festivals 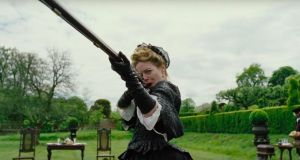 The Favourite, Yorgos Lanthimos’s much-anticipated follow-up to The Lobster and Killing of a Sacred Deer, which is produced by Element Pictures in Dublin

The first cuckoo of the 2019 awards season has sounded with the announcement of the programmes for the overlapping Toronto and Venice film festivals. Two Irish films are in the mix. John Butler’s Papi Chulo, follow-up to the same director’s Handsome Devil, will have its world premiere in the top-flight “Special Presentations” section at Toronto. Yorgos Lanthimos’s The Favourite – already pencilled in as an Oscar contender – will compete for the Golden Lion at Venice.

Produced by Treasure Entertainment with the assistance of Screen Ireland (formally The Irish Film Board), Papi Chulo concerns the friendship between a TV weatherman and a Latino migrant worker.

“We’ve been at Toronto before with two of John’s films,” Rob Walpole, producer of Papi Chulo, told The Irish Times. “But to get into Special Presentation is a giant leap forward. It puts him on a completely different level altogether. He’s in the same section with people like Alfonso Cuarón.”

The Favourite is Lanthimos’s much-anticipated follow-up to The Lobster and Killing of a Sacred Deer. Like those films, the Greek director’s latest was developed and produced by Element Pictures in Dublin. The film stars Olivia Colman, Rachel Weisz and Emma Stone in an offbeat treatment of the tension between Queen Anne and her rivals in 18thcentury England. Ed Guiney, producer of The Favourite, commented: “It is incredible to be in this year’s line up at Venice with some of the best director’s working: Luca Guadagnino, Mike Leigh, Jacques Audiard.”

Guiney is, indeed, in particularly tasty company this year. Over the last decade, the Venice Film Festival, which begins on August 29th, and The Toronto International Film Festival, starting on September 6th, have gained in strength as studios target potential award winners for release in the months leading up to the Oscar nominations. A number of films that were expected to premiere at Cannes in May will now screen first by the Lido or beside Lake Ontario.

Much of this year’s Venice chatter was, however, about the surprise inclusion of the Coen brothers’ the Ballad Of Buster Scruggs. Made for Netflix, the project was originally announced as an anthology series and, until Wednesday morning, few insiders knew that it had transformed itself into a feature. If Netflix choose to schedule a limited cinema release before streaming, it is sure to be another player at Oscar season.

“We’ve always loved anthology movies, especially those films made in Italy in the Sixties which set side-by-side the work of different directors on a common theme,” the Coens confirmed. Netflix are also behind the restoration of Orson Welles’s The Other Side of the Wind – controversially pulled from Cannes – which will play out of competition.

Toronto can boast the world premiere of the follow-up from the director who, after some confusion, beat La La Land to the best picture Oscar. Barry Jenkins’s If Beale Street Could Talk stars newcomer Kiki Layne in an adaptation of an acclaimed James Baldwin novel.

Oscarologists will also have their eyes on Bradley Cooper’s A Star is Born. Featuring the director and Lady Gaga as, respectively, veteran singer and fresh ingénue, the latest version of that old warhorse – playing at both Venice and Toronto – has already picked up positive word from sneak screenings with celebrities such as Sean Penn and Robert De Niro.

The Irish Times will be reporting from the awards starting grid at Toronto.