The news that Spielberg is remaking ‘West Side Story’ drew some fire, but some of our best-loved films are remakes or ‘fresh’ adaptations of original novels. Need we go on? 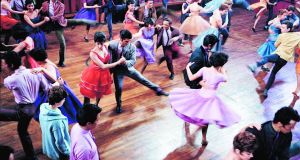 Step back: Will Steven Spielberg’s remake of West Side Story move the action from the now-prized real estate of west Manhattan? Photograph: Ernst Haas/Hulton Archive

I made this up. But humans have been complaining about remakes since they learned to walk upright. Yes, we know there are only seven stories. But do we have to keep telling the one about the man who gets bitten by a radioactive spider? That sort of thing.

Oh, for the golden days of Hollywood. The Maltese Falcon? The Wizard of Oz? A Star is Born? Some Like it Hot? The studios were once at home to original thinking. Right?

You’ve spotted my wheeze. The best-known versions of all those films were remakes. (A fourth version of A Star Is Born, featuring Lady Gaga and Bradley Cooper, will be with us in October.) So, perhaps we shouldn’t get too het up about news concerning imminent remakes of two films.

In January, a casting call was published for Steven Spielberg’s new take on West Side Story. Just this week, the trade papers reported suspicions that Paul King, director of the sublime Paddington films, was “in talks” to direct another adaptation of Roald Dahl’s Charlie and the Chocolate Factory. The news and the reaction to the news kick up some interesting questions about what we mean by a remake (lots of things) and whether they are necessarily a bad thing (obviously not).

Back to the novel

A purist might argue that if a film has an original source then no subsequent versions of that source can properly be called remakes. Many are the film-makers who, when challenged on such projects, proudly declare they will “be going back to the novel”. There are degrees of truth here. The three big screen versions of, say, Great Expectations really do feel plucked discretely from Dickens’s novel. Alfonso Cuarón’s contemporary version from 1998 draws nothing of consequence from David Lean’s great 1946 adaptation. The novel looms large.

By way of contrast, Pierre Boule’s Planet of the Apes (formerly Monkey Planet) is so obscure that Tim Burton couldn’t sincerely claim – as he did when later attacking Charlie and the Chocolate Factory – that he was returning to the source. Jimmy Sangster, when writing Hammer’s Curse of Frankenstein, swore that he was going back to the book, but the eventual film had as much to do with James Whale’s 1931 version as it did with Mary Shelley’s durable philosophical novel. And so on.

The various versions of A Star Is Born can forward no such excuses. A team including Dorothy Parker devised the scenario for the excellent 1937 original. Those others are remakes by any definition.

Spielberg finds himself at an odd end of this conversation. Leonard Bernstein and Stephen Sondheim’s musical has been revived on stage countless times since its debut in 1957. Nobody much minded. Nobody much minds when producers revive The Seagull or King Lear. Yet Robert Wise and Jerome Robbins’s 1961 film is seen as definitive, untouchable, sacrosanct. This has something to do with its permanent availability. Unlike John Gielgud’s Hamlet or Ian McKellen’s Uncle Vanya, it can be accessed whenever we choose.

Why do we need another? That, I would suggest, is a question Spielberg and his team should be allowed to answer for themselves. They may choose to update it. Maybe the action will move from the now-prized real estate of west Manhattan to neighbouring boroughs. With what “social diseases” will Officer Krupke be confronted in 2019? I’m prepared to hear suggestions.

All but one of the 10 highest grossing films of 2017 was a sequel; 20 years ago, just two of the top 10 were sequels. There’s your problem

The objections to King’s potential Charlie and the Chocolate Factory have more to do with the adjacency of the most recent version. There is, in the current climate, no great urge to seek out Johnny Depp’s weird stew of showroom dummy and the Child Catcher. But that Tim Burton film was a mere 13 years ago. Is it too soon?

The haphazard, but charming, Gene Wilder adaptation was steeped in post-psychedelic flavours that Dahl (who despised that film) never imagined. If Paul King proved anything with Paddington it was that, if approached with care and love, much-loved children’s stories can be retooled for rising generations. If he can wash out memories of Burton’s 2005 aberration then more power to him. It’s never too soon for that.

Yes, there is too little fresh material in mainstream cinema. The greater problem, however, is sequels. Each dead horse is flogged until the spin-offs run rancid from every wound. All but one of the 10 highest grossing films of 2017 was a sequel; 20 years ago, just two of the top 10 were sequels. There’s your problem.

Relax about the remakes. Remakes gave us The Wizard of Oz, The Maltese Falcon, A Star Is Born, The Fly, A Fistful of Dollars . . .