Goldstone: Power and corruption in the Australian outback 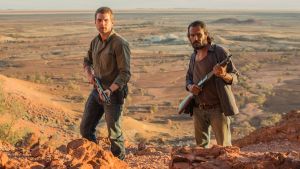 No contemporary screen actor can do duplicity quite like the great Jacki Weaver. There comes a moment in the lovely dying-young drama Irreplaceable You when Weaver uses the word “schmuck”. She means it too, and yet it still sounds like a token of friendship. In Goldstone, she smiles and coos to terrifying effect. As Maureen, the mayor of an Australian outback mining town, her twinkling face broadcasts her crookedness and hints at worse to come.

She is baffled when Josh (Chronicle’s Alex Russell), the once idealistic, now entirely compliant local cop, informs her that a police detective has come to town.

“What?” asks Maureen. “Like an Indian black or African black?”

The stranger in question is Detective Jay Swan (Aaron Pedersen), the quiet, indigenous cop at the centre of director Ivan Sen’s 2013 thriller Mystery Road. Swan is searching for a missing Chinese girl, likely the victim of a human trafficking operation. There is plenty of skulduggery afoot, dots that must be joined to link imported Chinese girls, a prostitution ring, the local mining company and the Aboriginal council.

Swan’s investigation is met by gunfire and punctuated by drunkenness. Josh is repeatedly warned to keep his head down. Will he finally acquiesce and fall in line with the corrupt locals or will he join forces with the flawed, monosyllabic outsider? The film keeps us guessing until the final scene.

Following on from Mystery Road, Ivan Sen’s fifth feature provides a nuanced depiction of Australian racism in the guise of a western. Everything in the screenplay is neatly counterpointed: Swan is both a hero and a bum; the Chinese girls need rescuing but Pinky (Kate Beahan), a cheery mobile sex worker in a neon-pink caravan, does not; there are Aboriginal elders on the take (Tommy Lewis) as well as the unscrupulous mayor and the mine supervisor (David Wenham).

Swan is repeatedly addressed like an unwanted new frontier sheriff, with orders to “turn that rustbucket around” and “get on your horse and ride out of here”.

This is not the Gothic and burnt-orange-hued nightmare of Wake in Fright. This is contemporary, if far-flung Australia, where businesses can rely on heavily armed, private security firms, and where slavery happens through passport confiscation.

The brilliant Sen – the director, screenwriter, cinematographer, and composer here – yokes classic genre tropes with new technologies. Drone photography both emphasises the loneliness and speaks to a more ancient relationship with the land. David Gulpilil’s performance as an Aboriginal elder allows a strange spirituality to creep into the hard-bitten material, and for a heartbreaking echo of his breakthrough role in Walkabout.

Alex Russell and Aaron Pedersen are equally yet differently cynical, an ideal noir couple kept apart by horse opera etiquette. Might we have a trilogy, please?