Irreplaceable You: A ‘terminal romance’ exclusive to Netflix

Review: Gritty it is not, but it won't have you reaching for the sick bucket either 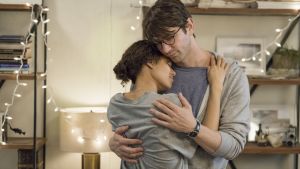 We may not be able to access the precise metrics but we do know that romances do a brisk trade over at Netflix: remember those 53 viewers who were outed for watching the pathologically cheesy A Christmas Prince every day?

Irreplaceable You, one of the streaming giant’s superior exclusives, arrives with impeccable credentials. Stephanie Laing, the veteran producer of Veep and Eastbound & Down, directs; the wildly charismatic Gugu Mbatha-Raw (Belle, A Wrinkle in Time) stars; the larger ensemble includes such heavyweights as Christopher Walken and Jacki Weaver.

As terminal romances go, Irreplaceable You isn’t as clever as Me and Earl and the Dying Girl or as teenaged as The Fault in Our Stars or Now Is Good. But it does avoid the many pitfalls associated with the sub-genre, being neither as misguidedly offensive as Me Before You, nor as chemistry-free as Sweet November (the one with Charlize Theron and Sad Keanu at his saddest).

If you’re here to see a sick bucket, forget about it. Irreplaceable You is seldom gritty. Bess Wohl’s script does, however, attempt to capture its heroine’s rage against the dying of the light.

Abbie (Mbatha-Raw) and Sam (Game of Thrones’s Michiel Huisman) have been together since she bit him on a childhood trip to the aquarium. Just as they’re discussing cake options for their wedding day, Abbie is diagnosed with cancer. Within seconds, the conversation in the doctor’s office has moved from bombshell to palliative care. She will not be recovering.

The latter’s quips concerning his wife’s future sex life get Abbie thinking. Sam, a nerd and a professor, is sure to “get eaten alive” once she is gone. Myron warns her that her routine scouring of dating sites and attempts to fix her soon-to-be-widowed partner up are symptoms of anticipatory grief. She carries on regardless.

It sounds unbearably beatific; it’s not. Irreplaceable You is not afraid to depict its central characters as unreasonable jerks. Sam and Abbie’s apparently perfect relationship is anything but. Abbie pushes and shoves against others and the inevitable. She squabbles with her overbearing mother, she gets caught up in her scheming, and she repeatedly lashes out. Sam, too, is not the support he might have been.

Laing adds out-of-body moments and momentary Proustian rushes to convey Abbie’s turmoil. Mbatha-Raw once again begs the question: why isn’t Mbatha-Raw in everything? Walken is charming. And then along comes Jacki Weaver, who requires all off five seconds to walk off with the picture.

The lactose-intolerant have nothing to fear: no cheese was used in the making of this movie.