Fifty Shades of Grey, part 3 is out this week – a stinky post-Weinstein anachronism 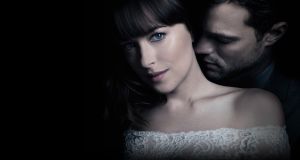 Jamie Dornan and Dakota Johnson can do nothing with material that has become worse with each installment.

Some years ago, an acquaintance of mine made a film that did not achieve everything it set out to achieve. Oh, let’s not mince words. It stank.

Afterwards, I consulted another pal in the foyer. “What can we say that’s positive?” I wondered. “How about: ‘I’m delighted it’s over’?” he suggested.

We can say one positive thing about the Fifty Shades of Grey trilogy. They’re over. We’re done with them.

My negativity may, of course, be premature. Fifty Shades Freed, the third film in the trilogy, will not be press-screened until 24 hours before its release on Friday. It is possible the distributors are holding back because they fear reactions may be so positive the picture will struggle to meet subsequent expectations. Anything’s possible. Donald Trump is president of the United States.

It’s easy to make fun of the continuing spanky series. It would be better to compose a piece explaining why Fifty Shades is a good thing.

We could point out that it serves a largely female demographic still too often ignored by Hollywood (on its opening weekend, the first film skewed 70 per cent female). We could argue that EL James, author of the source books, proved that it’s never too late to become a sensation. We could suggest that the success has taken some of the shame out of reading erotica. Jamie Dornan and Dakota Johnson aren’t bad in the main roles. The films could have been even longer. Will this do?

It really isn’t worth the effort. As bad things go, the 50 Shades things are very bad indeed. When the first book emerged in 2011, more than a few commentators raised eyebrows at the apparent celebration of an abusive relationship.

Let’s give the series its due. The films are even clearer than the books in asserting that the sexual violence is consensual. The hilariously named Anastasia Steele has to sign an abundance of forms confirming she has agreed to be “submissive” to the sinisterly boring Christian Grey. At times, 50 Shades of Grey comes across a film about the conveyancing of real estate.

To press home the point, Christian leaps in to defend Anastasia when a sleazeball presses himself on her in a bar. “Dude, she said: ‘no’,” he bellows. Got that? Everything clear?

None of this gets us past the fact that this is a story about a rich man using his power to inveigle a less advantaged woman into sexual and professional submission. She arrives to interview him for her college newspaper and, after some oily flirting, he gets to whack her with a belt. Why, it’s almost like a film producer abusing his position in an audition.

The timing could have been worse for Fifty Shades. If the Weinstein revelations had emerged in October of 2014, months before the release of the first film, then the momentum might have stalled fatally. As things stand, many fans have come to see the Fifty Shades movies as a Valentine’s Day ritual.

The first film made a very healthy $572 million. Fifty Shades Darker, the second picture, did decline to $381 million, but these things are made on a relatively tidy budget. The desire for closure will push Fifty Shades Freed towards the top of the 2018 chart.

It, nonetheless, feels as if we’re wading through the fetid, stinky wake of a soon-to-be-unlamented phenomenon as it disappears over the forward horizon. One can think of few less satisfactory post-Weinstein artefacts than a romantic drama that romanticises workplace harassment.

Isn’t it all fantasy? Well, all that form-signing and beating up of pests in bars suggests the film is seeking to nullify its own transgressions. The weird genre of female literary erotica that focuses on rape does, at least, assume that the everyday rules of sexual morality have been suspended. Fifty Shades thinks it has found a way of accommodating these abuses within bourgeois values. It hasn’t.

Observing Fifty Shades peter out is like finding yourself prematurely corralled into a 2018 nostalgia show. “Back in 2018, there were still some people around who liked this sort of mucky violence,” some current pop star tells the camera. “But Fifty Shades did feel like it was on borrowed time.”

EL James, who began the novels as fan fiction within the Twilight universe, has failed to escape her creation. After concluding the record-breaking trilogy (if you seek some estimate of the copies sold, look up the number of atoms in the observable universe), she went back to the beginning and started telling the same awful story from Christian Grey’s perspective.

Grey, the first in the follow-up trilogy, did well enough, but it couldn’t compete with the original series’ sales. “Grey’s enormous 1.1 million-copy total volume was not quite a quarter of the even more enormous 4.7m Fifty Shades of Grey shifted,” Kiera O’Brien wrote in The Bookseller.

Published late last year, Darker, the second (or fifth) book, has performed less well again. In its first week it sold 22 per cent of the 385,972 copies that Grey managed on its debut in 2015.

Let’s not weep tears for Ms James or for the team behind the films. Fifty Shades is still an industry. But it’s now more Irn Bru than Coca Cola.

Neither of the first two movies has even the camp appeal to attract bad-movie cultists. If Fifty Shades Freed can drag fabulous Kim Basinger – back as the evil sex maniac who lured Grey into licentiousness – towards the front of the stage then that situation may change. But, to date, the films haven’t even been fun-bad.

Little blame should be attached to the director of the opening project. Sam Taylor-Wood subsequently admitted that she should never have taken the job. It seems that EL James, who came up through fandom and shared that world’s inflexibility as regards adaptation, refused to allow any significant tweaks or innovations.

“Two different creative visions,” Taylor-Johnson remembered. “Every scene was fought over. It was tough. It was like wading uphill through sticky tar. Her thing was: ‘This is what the fans expect.’ I’d be like: ‘Well, let’s try and hit those marks but create a new universe at the same time.’ ”

So we have ended up a fair representation of the world created by James at the start of the decade. It already feels as decrepit as emanations of the swinging sixties or the Jazz Age.

It’s hard to see Fifty Shades registering with future audiences. As you read this, The Greatest Showman, a poorly reviewed musical starring Hugh Jackman, is evolving into the sort of cult that could entertain sing-along students in the 2050s.

By that stage, Fifty Shades will be as puzzling to audiences as now-forgotten sensations such as the novels of Marie Corelli or the films of Dame Anna Neagle.

Who? My point exactly.