High-flying Antoine Fuqua at home making films that are grounded 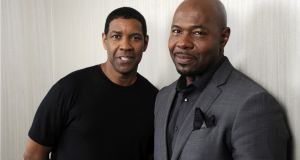 In the hours before I meet up with Antoine Fuqua, he’s making headlines. In reports that were swiftly dismissed by his agent, Fuqua, the director of The Equalizer and the Oscar-winning Training Day, was said to have met with Bond producer Barbara Broccoli who, belatedly, allegedly, possibly acknowledged the need to cast a POC (person of colour) as 007. Before you could say “just cast Idris Elba”, the old black Bond story is back with a bang. “We’ll see,” smiles Fuqua coyly.

Frankly it’s hard to see where he might squeeze James Bond into his crowded schedule. He’ll fly out from London in days and back to the editing suite to finalise the sound mix on his Ali documentary. He’s a producer on the TV shows The Resident and Shooter. He’ll soon reunite with Southpaw star Jake Gyllenhaal for the Medellin Cartel mini-series The Man Who Made It Snow. He has another project with Chiwetel Ejiofor as director. There’s a remake of Scarface in development. He’s even had to turn Kevin Feige and the Marvelverse down.

They offered me Morbius which is a darker version of the Marvel stories. But it’s just not me

“I have a son who is 14, and I’d love to do something like that for him,” says Fuqua. “But I know what I’m good at. I know where my heart beats. I know I prefer material that’s a little more grounded.

“They offered me Morbius (the Living Vampire) which is a darker version of the Marvel stories. But it’s just not me. I think all of the effects in those movies are fantastic. I’ve enjoyed some of them. But where does the director fit in? Are you just coming in as manager? How do you impose your process on how they get things done? They’re working to a formula – which I understand – because it’s a huge business. I’m just not that guy.”

Where his heart beats, he says, is somewhere south of the $170 million budgeted Mission Impossible 5 with actioners like The Equalizer 2. Last month the comparatively modestly budgeted $62 million film – a sequel to the 2014 reboot of the pulpy Edward Woodward TV show – beat Mamma Mia to the top of the US box office.

“You’re in the middle, not quite, but you don’t have $170 million and you’re in a place where you’re compared to the big action movies,” says Fuqua. “It’s difficult to compete with Mission Impossible.

You can point your camera at a lot of nice things. But they won’t resonate or have that power or gravity even if the material is well written

Following on from Training Day and The Magnificent Seven, The Equalizer 2 marks Fuqua’s fourth collaboration with Denzel Washington.

“He makes all the difference,” says Fuqua. “You can point your camera at a lot of nice things. But they won’t resonate or have that power or gravity even if the material is well written. It’s that thing that’s hard to put your finger on. When it’s in front of you, you know it. But we don’t take anything for granted. It still comes down to doing the work. There’s a trust and a shorthand at times. But we go after it like it’s the first time.”

Fans of Fuqua will not be surprised to find a visual reference to The Searchers in the director’s 12th feature film. Fuqua is fond of the canonical, having worked a key sequence from Eisenstein’s Alexander Nevsky into his 2004 version of King Arthur. Akira Kurosawa remains his most guiding influence. It’s not necessarily, he notes, what you’d expect from a kid who grew up in the Pittsburgh ghetto.

“I was taking an art class and studying different time periods and movements,” he recalls. “And one day we were doing Asian art and a still came up from Ran. Storyboards were paintings. And I remembered seeing that image before. I loved movies. I loved watching westerns with my grandmother, who knew every action and loved westerns because she was southern.

“I loved sneaking into the second feature in some place downtown. That was my escape. I’d go to the Regency theatre and watch obscure karate films and Bruce Lee. And one day they happened to have a Japanese bill, and it just blew me away. I didn’t even know what a samurai was. But I was completely transported.”

Fuqua had a cousin who eventually became an anaesthesiologist. They were the first two members of the family to get to university. Antoine was studying to be an engineer and hoped to get into the military, but remained fascinated with the idea of working in film.

“My dad told me to get my head out of the clouds,” recalls Fuqua. “I had a scholarship. I was going to fly jets. He was a blue-collar guy. He thought I was crazy.

“ I didn’t even know what I wanted to do in movies. My grandmother was the one who went along with it. When I told her I was thinking about leaving school, I thought maybe she’ll talk me out of it. Because I had a lot of fears. But she said ‘well, you better do it while you’re young. Now go to the store and get me some peach snuff’.”

By the early 1990s, Fuqua had become one of MTV’s leading auteurs, directing videos for Prince, Coolio, and Stevie Wonder, before breaking into features with Hong Kong superstar Chow Yun-Fat’s first American movie The Replacement Killers (1998).

“MTV was like Andy Warhol’s Factory [studio],” recalls Fuqua. “New people, new ideas, new technology. There was me and David Fincher and Michael Bay and Ridley Scott. You’d meet Jean-Baptiste Mondino and guys from Europe you might never have heard of. It was an amazing, inventive space, and now it’s gone. I was interviewed by MTV earlier today. I wasn’t even sure it was still a thing.”

In the age when Ryan Coogler and Ava DuVernay are the most sought after directors in Hollywood, it’s easy to forget what a trailblazer Fuqua, one of only a handful of consistently busy African-American filmmakers, has been in the industry.

“I’m happy about everything that’s happening,” he says. “For me the reward is that my thinking was correct. I constantly tried not to be put in a box as an African-American filmmaker. I knew that was always going to be there. And the only thing I could do besides talking about it in the press or protesting about things was to do the best work I can do.

“I had some success along the way. I had things that didn’t turn out how I wanted. King Arthur wasn’t a financial success, but the success was I got to do it. It wasn’t exactly my world. I always hoped that if I could do quality work, it might open the door for other people.”