Christopher Robin: An exercise in existential dread. For children

Review: Sadness pervades this adaptation. What’s going on? Is there honey still for tea? 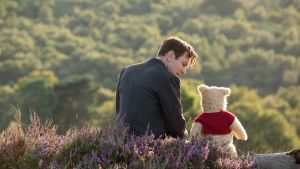 A few years ago the first trailer for Paddington arrived to an almost universally hostile reception. Disturbed by the uncanny-valley quality of the excerpted scenes, wags manipulated screenshots to place the poor bear in scenarios typical of horror cinema. Holding an axe in a bloody corridor. Lurking over disembowelled bodies. Those sorts of things.

Paddington turned out to be unexpectedly delightful and we gratefully shelved fears that a beloved bear would be put through the seven circles of cinema hell. Until now.

That’s not quite accurate. Disney’s latest live-action retread of an animated favourite never quite strays into horror territory. But an unexpected sense of existential dread hangs over much of the confusing action. There really is a sequence in which the grown Christopher Robin (Ewan McGregor) wanders through allegorical fog while trying to disentangle himself from a midlife crisis. Pooh and Tigger are dusty and sad. Christopher Robin is closer to The Seventh Seal than The Shining, but it’s as far away from Winnie the Pooh and the Windy Day as either.

What’s going on? Is there honey still for tea?

The set-up is similar to that of Stephen Spielberg’s much-maligned Hook. We begin with the animals (toys?) that crowded AA Milne’s stories saying farewell to Christopher Robin as he makes his way towards adulthood. (It’s the end of Toy Story 3, but not nearly as moving.) Christopher goes to big school, fights in the second World War, marries a nice girl he met on the train and settles down comfortably with her and their daughter.

He’s not really happy. But he doesn’t know he’s not really happy. Work as an executive in a luggage company takes him away at the weekends. He has a sweet relationship with his child and a largely amiable one with Mrs Robin – Hayley Atwell is beyond underused in a disgracefully undercooked “disapproving wife” role – but his inability to properly connect casts a figurative gloom that matches the literal gloom of Matthias Koenigswieser’s sepulchral photography.

At work, horrible boss Mark Gatiss is eager to impose financial cuts. He and other antagonists drag up a refrain that explains their grim, materialist outlook: “Nothing comes from nothing.” Hang on? Isn’t that from King Lear? Doesn’t the title character bellow that at his own daughter before going crackers on the heath? What kind of family film is this?

A measured uplift arrives when, for no satisfactory reason, Pooh arrives in the park opposite Christopher’s home. He brings tonal confusion with him. Hook was deeply flawed, but it understood its own premise: the grown Peter has, with age, genuinely forgotten his life as Peter Pan. When Pooh appears, in contrast, Christopher expresses only the mildest surprise. The talking bear, piglet and tiger were, it seems, utterly real and – though nothing else in this universe yields to magic realism – he has been living calmly with the memory ever since. He doesn’t wonder at their anthropomorphism. He doesn’t wonder why, in a very English England, they all speak with American accents.

The script is partly the work of Alex Ross Perry, who writes miserable films about miserable Americans such as the miserable (though excellent) Queen of Earth, and it bears traces of an admirable ambition to work philosophy in with the much-delayed knockabout action. Talking in a voice cracked with age, his furry skin greyed by neglect, our beloved bear delivers the sort of gnomic aphorisms that inspired Benjamin Hoff’s clever book The Tao of Pooh. All that would be fine if, like Disney’s recent delightful Pete’s Dragon, the picture also delivered on its promise of fun and adventure. The final impression is closer to the hipster arrogance of Spike Jonze’s Where the Wild Things Are. We ask the same question now as we asked then. Who, in the name of bejaysus, is this thing for?