Marlina the Murderer in Four Acts: The feminist western you need to see

Review: A vicious, Sergio Leone-style tale of one woman’s revenge on a rapist 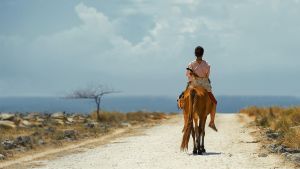 As the feminist satay western you never knew you needed to see opens, Marlina (Marsha Timothy channelling Clint Eastwood) is home alone, save for the mummified corpse of her late husband sitting in the corner, when local brute, Markus (Egy Fedly) roars up on his motorcycle and lets himself in.

Here’s the deal, he explains: the rest of his cronies will soon descend upon Marlina’s small farm soon, they’ll be taking her cattle, and – if they find the time – raping her.

She’ll be “the luckiest woman in the world,” he promises. But for the moment, she’d best get in the kitchen and start making chicken soup. She has half an hour.

Happily, the evening does not go as Markus intended, leaving Marlina to journey faraway, in search of police protection, with a disembodied head on her lap, assorted corpses stashed at home, and two irate bandits on her tail. She’s variously accompanied by the pregnant Novi (Dea Panendra), a horse and a headless ghost.

We say Leone: we mean the Dollars trilogy, an allusion that’s sounded out by Yudhi Arfani’s knowing trumpet soundtrack. Marlina may know how to cook chicken soup, but, excluding survival skills, she has little in common with Once Upon a Time in the West’s civilising and sexually-pestered Claudia Cardinale.

The sweltering heat of the Sumba plains of east Indonesia, as captured in Yunus Pasolang’s sun-baked tableaux, makes for sunstroke surrealism. Is that really the headless corpse of Marlina’s rapist running behind her or is it a mirage?

The third feature from Mouly Surya (Fiksi, What They Don’t Talk About When They Talk About Love) is satisfyingly deadpan, viciously vengeful, and full of surprises.

Viggo Mortensen: It ‘felt awkward’ replacing Stuart Townsend in Lord of the Rings
2

Balloon couldn’t have landed at a more insulting moment
9