Agreement would resolve lawsuits and compensate the producer’s alleged victims 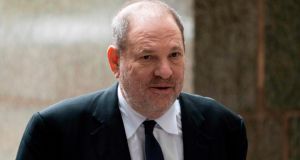 Harvey Weinstein and his former studio’s board members have reached a tentative deal worth $44 million, or about €39 million, to resolve lawsuits filed by women who accused him of sexual misconduct and by the New York state attorney general, according to three people briefed on the matter.

The outcome of the settlement talks will be especially notable because the lawsuits are one of the main avenues by which Weinstein could be held responsible for his alleged actions. He is facing criminal charges in New York for allegations of sexual violence against two women.

But more than 80 women have accused him of wrongdoing, and many of those complaints involve sexual harassment, which is a civil violation, not a criminal one. So the details of any settlement, such as whether it includes an admission of wrongdoing by Weinstein, would carry significant symbolism.

Under the proposed deal, about €30m would go to a pool of plaintiffs that includes alleged victims, creditors of Weinstein’s former studio and some former employees

The proposed sum is less than half of what was initially discussed as a victims’ fund as part of conversations last year between an investor group that was interested in buying assets of the Weinstein Co and Eric T Schneiderman, who was then New York’s attorney general. That proposed deal, which fell apart at the last minute, included a victims’ fund worth up to $90 million, or about €80 million.

Under the proposed terms of the new deal, about $30 million, or almost €27 million, would go to a pool of plaintiffs that includes alleged victims, creditors of Weinstein’s former studio and some former employees, according to the people briefed on the matter, who spoke on the condition of anonymity because the agreement was private.

The balance would go to legal fees for associates of Weinstein, including board members named as defendants in lawsuits. Insurance policies would cover the $44 million if the current agreement is finalised. It must be approved by advisers in charge of bankruptcy proceedings for the former Weinstein Co.

Weinstein did not return calls for comment. A spokeswoman for the office of the New York state attorney general declined to comment. A lawyer for the plaintiffs did not immediately respond to a request for comment. The Wall Street Journal was first to report the tentative deal.

Weinstein was long one of Hollywood’s most powerful figures, known for backing boundary breaking films like Pulp Fiction and Oscar winners like Shakespeare in Love. But in October 2017, investigations by the New York Times and the New Yorker revealed allegations that he had sexually harassed or abused numerous current or former employees and other women over several decades. The Weinstein Co, the Hollywood studio founded by Weinstein and his brother and business partner, Bob Weinstein, filed for bankruptcy in March 2018.

The movie and television studio, once known for Oscar-winning films like The King’s Speech and The Artist, had less than $500,000 in cash at the time and was facing a mountain of debt and a swelling number of lawsuits, including the one by New York’s attorney general. Lawyers for women who say they were victims of Harvey Weinstein have been in mediation since last year with representatives for the former studio mogul.

Also involved in the talks were lawyers for the former board members and the New York attorney general’s office, which last year sued Weinstein and his brother for violating state and city laws barring gender discrimination, sexual harassment, sexual abuse and coercion. The goal was to reach a settlement that would cover all of the suits pending against the former Hollywood mogul, his now-defunct movie studio and associates.

The Weinstein Co. is seeking to liquidate. In a recent bankruptcy filing, lawyers for the studio said the efforts to resolve legal claims by some of the women had stalled in recent months, and put additional strain on its dwindling resources. A separate bankruptcy filing on May 15th described the mediation process as “highly adversarial” and said at least 11 separate sessions had been held over a year.

Soon after Weinstein built his new defense team, one of his star lawyers, Ronald S Sullivan jnr, a law professor at Harvard University, came under fire by students there for representing the Hollywood producer

Harvey Weinstein, who is 67, has pleaded not guilty to the criminal charges in New York. He was initially indicted in state supreme court in Manhattan on sex-crime charges involving three women, including one who said that Weinstein raped her inside a hotel room at a DoubleTree in Midtown Manhattan in March 2013. The woman has not been identified in court papers.

He was also charged with forcing two other women to engage in oral sex with him. Lucia Evans, a marketing executive, said she was assaulted in his office in Tribeca in New York in 2004, and Mimi Haleyi, a production assistant, said Weinstein assaulted her at his apartment in 2006.

The judge, James Burke, dismissed the charge related to Evans after the Manhattan district attorney’s office acknowledged that the lead detective on the case, Nicholas DiGaudio, did not disclose information from a witness who said Evans had provided a conflicting account of the alleged assault. But DiGaudio, who has since been reassigned, has maintained that he did inform prosecutors.

Weinstein has denied the allegations and has said the relationships were consensual. Earlier this year, Weinstein also replaced his longtime defense lawyer, Benjamin Brafman, with a new “dream team” of lawyers who have a history of representing celebrity clients. His criminal trial is expected to begin September 9th.

Soon after Weinstein built his new defense team, one of his star lawyers, Ronald S Sullivan jnr, a law professor and a faculty dean of an undergraduate house at Harvard University, came under fire by students there for representing the Hollywood producer. This month, Harvard decided to end Sullivan’s term as dean on June 30th, following months of pressure from students. Later, Sullivan withdrew from Weinstein’s defense team. – New York Times