Review: Illumination’s weakest film since 2011’s Hop will still undoubtedly be a smash hit though 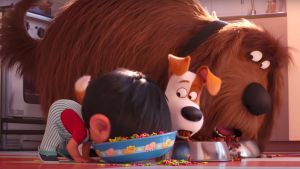 Max, a nervy Jack Russell, spent all of 2016’s The Secret Life of Pets adjusting to life with Duke (Eric Stonestreet), a large Snuffleupagus-sized dog adopted from the pound by Max’s human companion, Katie.

In this colourful sequel, he takes rather less time warming to Katie’s new husband and son, a toddler named Liam, that reduces Max (voiced by Patton Oswalt, who replaces Louis CK) to a mess of parental anxieties.

When the crew leave New York on a family vacation – say hello to Harrison Ford’s folksy, hard-bitten sheepdog – Gidget (Jenny Slate), the squeaky Pomeranian, runs up against a glorying of feline adversaries in a downstairs cat lady owned apartment.

On another floor in the same block Snowball (Kevin Hart), the Caerbannog-alike bunny of the original, has settled into domesticity and a superhero suit when Daisy (Tiffany Haddish), a plucky shih tzu, recruits him on a mission to rescue a mistreated white circus tiger.

(Let’s gloss over the evil, hook-nosed Russian circus owner and his Slavic-accented wolves, shall we? If it weren’t for that spy whale story last month, this would surely mark the peak Russophobic moment of 2019.)

Utilising a reliable Pixar trope – the inner lives of toys (Toy Story), the inner lives of inner lives (Inside Out) – The Secret Life of Pets imagined what Manhattanite animals might get up to when their humans went to work. An elaborate animal underground of flushed and discarded creatures expanded the universe into post-Looney Toons fantasy.

The Secret Life of Pets 2 drifts further away from the titular premise. Disparate, thrown together subplots see the gang driving cars, hijacking a train, and (probably) gearing up to debate Slavoj Žižek. Brian Lynch’s script fails to find decent roles for returning favourites Buddy, Mel and Chloe. Makeweight dialogue is entirely dependent on its talented voice cast. Hart has seldom had more aarghing to do.

Illumination Entertainment, the animation studio behind Despicable Me, seldom attracts the kind of rave notices that are bestowed on Ghibli or Pixar. They are, nonetheless, a reliable hit-making imprint. The agreeably zany Secret Life of Pets 2 will undoubtedly be a smash hit and will ramp up sales of the overpriced spin-off magazine they sell on those begging shelves near supermarket cash registers. Still, it’s a sloppy affair, and Illumination’s weakest film since 2011’s Hop.