Review: It doesn’t always make sense, but the choreography distracts from the musical non sequiturs 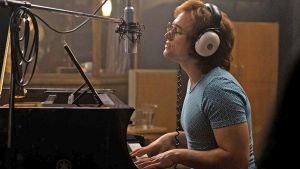 Why were people ever worried about this hugely enjoyable biopic of Elton John? Dexter Fletcher has already shown he knows how to direct such things in the Proclaimers biopic Sunshine on Leith. He has the chops and he exercises them to terrific effect in a film that will play well to all but those fatally allergic to the best tunes of Elton John (don’t worry, there’s not much here from after 1978).

The film-makers have abandoned the dull plod through events for a musical of the old school. That’s to say the tunes are sung as part of elaborate dance numbers that spring spontaneously from the situation.

Saturday Night’s Alright for Fighting, for instance, breaks out when young Elton – still Reg Dwight – entertains potentially riotous punters at the pub in Pinner. More puzzlingly, Don’t Let the Sun Go Down on Me bubbles up at his first meeting with future wife Renate Blauel. It doesn’t always make sense, but the choreography is strong enough to distract from the musical non sequiturs.

Taron Egerton, so good in Fletcher’s Eddie the Eagle, makes a comic turn of a man who, despite well-documented crises, would be hard to play as a figure from Strindberg. He sings the songs in a voice that skirts the original. He gets the suburban speaking vowels more convincingly.

Bryce Dallas Howard’s niceness gives an interesting flavour to his frequently disapproving mum. Just look how she scowls when – facing up to his gayness – she suggests that he will never find true happiness. The most important relationship in the film is with Bernie Taupin, John’s lyricist, and Jamie Bell makes a sound, reliable northern cowboy of that still unlikely millionaire.

The journey to success is more entertaining than the familiar slump into drink ’n’ drugs mayhem. We get lovely, semi-idealised images of London in the 1950s and 1960s: a walk down Denmark Street, the quiet desperation of petit-bourgeois life. The latter sections are hampered not just by their familiarity – you just know something chemical will happen round a swimming pool – but also by the certain knowledge that, though Elton pulls himself together, we’re not heading to any proper revival of the career.

Further tension is added by the worry that we may end with the great man’s apotheosis among the emotional wreckage of Princess Diana’s death. Now there’s a tricky topic. You’ll have to find out for yourselves if they go there. No spoilers.

Opens on May 22nd

Covid-19 and dementia: ‘My father studies me, as if trying to put together a difficult jigsaw’
10