Review: Delightful film follows two friends as they party their way into oblivion during last week of high school 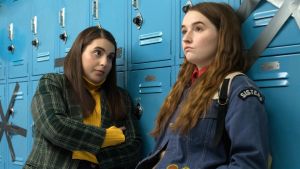 The terrific directorial debut from actor Olivia Wilde will not (alas) score as many Oscar nominations as Greta Gerwig’s era-defining Lady Bird. It will not land in as many academic theses as the less heated Eighth Grade. But it is, in its bawdy way, at least as ambitious as either of those two high school movies.

Working from a busy screenplay by Katie Silberman and others, Wilde looks to have dragged the party-party genre into the 21st century. Few male-heavy forms have resisted reconstruction quite so forcefully. From Animal House to Superbad, guys have been working hard to get the girls and hold down the beers.

The films hangs around two unlikely heroes for such an entertainment. Amy (Kaitlyn Dever) and Molly (Beanie Feldstein) aren’t just (for heaven’s sake!) girls, they are hard-working girls who, having foresworn partying, are looking forward to Ivy League prestige. The picture plays a trick on both them and us in its opening scenes.

The script seems to be positioning the pair as high-brow achievers set to leave the surrounding slackers in the dust. They soon learn that the cool girls have got into equally good colleges despite finding time for booze and debauchery. (With all these Ivy League entrants, this school must be among the highest achieving in the nation.)

There’s only one thing to do. The pair will have to make up for lost years and party their way into oblivion during their last week in the old manor. “Nobody knows that we’re fun,” Bernie says.

Like Eighth Grade and Lady Bird, Booksmart exists in a less frightening version of the American high school than we have become used to in cinema. Jocks don’t rule all. Theatre kids and nerds have fun in their own safe spaces. But Amy and Mollie still face challenges. They lie to their right-on parents – who seem to think they’re in a relationship – and make for a party hosted by the most popular kids in town.

Booksmart breaks no new ground in its approach to structure. The picture zings and buzzes from comic misunderstanding to absurdly contrived set up. Watch as they somehow end up playing pornography via the Bluetooth functions on their teacher’s car. Chortle as they find themselves in the worst yacht party in movie history. Groan as they cope with something even worse: a murder mystery evening hosted by kids who fancy themselves contemporary Noel Cowards.

The threat level is always at a comfortable level. The main danger is excruciating embarrassment. When the kids go on a psychedelic trip, the animated fantasy that follows is closer to Toy Story than Hieronymus Bosch.

This speaks of good faith from the screenwriters. They deal in such lovingly nurtured characters that it would be a sin to put them in any serious danger. Feldstein (who may smart at still being identified so often as Jonah Hill’s sister) offers a smarter, more assertive – though still uncertain – version of the character she played in Lady Bird. Her crackling wit is always tempered by a sense that she’s just outside her safety zone. Previously a strong supporting player in Detroit and Beautiful Boy, Dever prompts us to wonder where she’s been hiding that comic timing.

Visitors from outside the loop are always the best investigators of fictional world. Amy and Molly have kept themselves apart from the party-party world and their discoveries are our discoveries. Shot and edited with great invention, scored to insidious beats by Dan the Automator, Booksmart is not short on outrageous larks and inappropriate remarks. It is, however, that sense of discovery that sets it apart. That and its warmth, generosity and openness.

Opens on May 24th