Memoir of War: As memorable as an overextended Stella Artois commercial 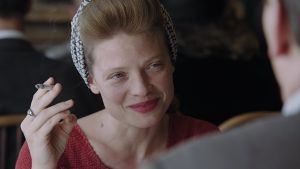 Mélanie Thierry as Marguerite in Memoir of War

Set against the last days of German occupation in France, this overextended Stella Artois commercial stars Mélanie Thierry (in a committed performance despite unlovely material) as Marguerite, a writer desperately awaiting news of her husband, Robert Antelme (Emmanuel Bourdieu), an activist in the French Resistance who has been arrested. Between frock changes – this woman has a new outfit for everyday of the 1940s – Marguerite approaches Pierre Rabier (Benoît Magimel), a French policeman and Nazi collaborator who is taken with her and her literary reputation.

An ill-defined game of cat-and-mouse ensues as she seeks her husband’s whereabouts and Pierre seeks to ply her with wine and meats, a dynamic that works toward a shoddy, implausible drunken dance sequence.

Meanwhile, Marguerite dallies with the Resistance to no clear purpose. Her lover (and her missing husband’s best friend,) Dionys Mascolo (Benjamin Biolay), is more involved with the underground than she is: goodness knows, that wouldn’t take much. Mostly, she paces and pouts and ponders around her well-appointed apartment.

In a fruitless attempt to convey the source material’s nouveau roman stylings, the film plays with time and space: in one corner of the screen Marguerite enacts what Marguerite is narrating elsewhere in the frame. It might have a been an interesting device if the film wasn’t weighted down with vast, stagnate chunks of voice-over lazily lifted from La Douleur.

Other innovations fall similarly flat. Characters enter and exit with no warning or context, as if in first rehearsal for an episode of Mrs Brown’s Boys. Subplots begin and end abruptly and pointlessly.

Duras, a novelist (The Lover), philosopher, and screenwriter (for the Oscar-nominated for Hiroshima Mon Amour), must surely have been a more likeable or at least compelling character than the whiny flibbertigibbet at the centre of this film. This Marguerite has no agency which may well be an accurate reflection of those waiting for loved ones to return from the Holocaust, but which makes for a singularly shapeless cinematic experience.