Aladdin is a weird mess of woke film-making. Thanks Guy Ritchie

Review: Disney’s bid to make flesh of their animations has hit a speed-bump 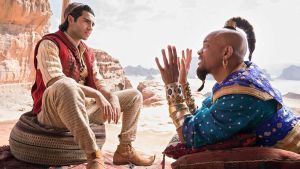 Mena Massoud and Will Smith in Aladdin. Photograph: Daniel Smith/Disney

The great Disney project to make flesh of their most successful animations has hit the speed-bump phase. Though not a disaster, Dumbo didn’t feel entirely sure of its tone and stumbled at the box office. Online reaction to the early Aladdin trailers – with a blue incarnation of Will Smith as Genie – have been largely negative.

What to make of Guy Ritchie’s finished film? Anyone approaching it without prior knowledge of the animated picture (there must be such people) would wonder how anything so culturally confused had made its way into the largest cinemas.

Ritchie has made a genuine effort to cast the film with ethnically appropriate actors and he’s carried that off quite well. Mena Massoud, an Egyptian-Canadian, makes a more roguish charmer of the title character. Naomi Scott, an Englishwoman of Indian descent, is better still as one of the less drippy Disney princesses: bored by Aladdin’s flash; good with rolled eyes. Marwan Kenzari is less good as the evil Jafar, but that’s largely because he feels 15 years too young for the role.

This remains, however, a weird mess of vaguely woke film-making and cultural appropriation on the DeMille scale. The look of the thing is exhausting. Beginning with a framing sequence that finds a retired Genie telling stories to his kid on a drifting caravel, we are quickly plunged into a version of Agrabah that suggests the style of an Arabian-themed family restaurant (the sort you find in Walt Disney World, I guess).

It’s all scattered cushions, pretty arches and mounds of orange spice. Aladdin’s movement across roofs and scaffolding will remind some of the original console game, but, like Ritchie’s disastrous King Arthur, it has at least as much to do with Assassin’s Creed.

All this speaks of uncertainty about how to bridge the gap between animation (where such production design works just fine) and live action (where less broad strokes are required). As in Dumbo, the animal characters are mired in an awkward no man’s land between realism and anthropomorphism. The Jungle Book somehow managed to pull this trick off with great aplomb. Aladdin too often prompts the question: what’s the point?

The better songs flourish. The bouncy revivalist spirit of 1990s Disney invigorates much of the action. But there’s a half-heartedness about this Aladdin. We had put off mentioning Smith for as long as possible, but there’s no getting away from the miserableness of his miscasting. Robin Williams’s explosive zip is replaced by a laid-back avuncular approach more suited to bedtime stories than mid-afternoon hijinks.

There’s something else. Almost everyone I have spoken to since the screening has remarked on the startlingly flatness of his voice. How did we get so far without knowing this?

Opens on May 22nd

Music Quiz: Can you solve this Beatles Mathical Mystery?
9

All Against All: A cautionary tale – and what 1933 can tell us about now
Real news has value SUBSCRIBE