Get Out review: A pitch-perfect neo-liberal nightmare 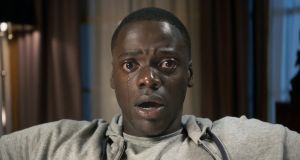 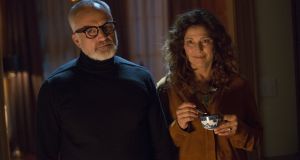 Film Title: Get Out

Here is a film about racism in a supposedly post-racial society that features few acts of explicit prejudice. Yet Get Out is not some quiet social comedy whose commentary hides in muttered asides. Jordan Peele’s blackly (ahem) comic horror builds elegantly from sinister omens to full-on viscera-gurgling mayhem. Terrible people do unimaginable things to decent folk for the most atrocious reasons. But the film has more to do with discomfort and envy than blind hatred. What a strange marvel it is.

It looks as if Peele’s model is Stanley Kramer’s cosy – and now practically unwatchable – 50-year-old liberal fantasy Guess Who’s Coming to Dinner. That was the one where nice white Katharine Houghton brought nice black Sidney Poitier back to her nice liberal parents and, after some uncomfortable moments with the nice black help, everyone got along very nicely.

Get Out (what a title, incidentally) begins in very similar fashion. Chris Washington (Daniel Kaluuya), a black photographer, and Rose Armitage (Allison Williams), his white girlfriend, are preparing for a first weekend at her parents’ house. Initially, much of the comedy derives from Rose’s efforts to appear racially sensitive. A police officer casts eyes to heaven when she objects to a request for Chris’s ID. Her boyfriend’s patient shrug suggests he’s suffered much worse.

They arrive to discover that mom Missy (Catherine Keener) and dad Dean (Bradley Whitford) are paragons of conspicuous toleration. Dean somehow manages to work his admiration for Barack Obama into his opening greeting. In one excruciating conversation, they practically apologise for having African-American staff. They’re just like family, you understand.

Peele has either cast with a sense of irony or has accidentally happened upon some tasty connections. Whitford was, of course, previously a white-bread democrat in The West Wing. Williams, the daughter of chiselled US news anchor Brian Williams, emerges from Lena Dunham’s hyper-privileged Girls. Welcome to the liberal elite, Chris.

The film works Chris’s social unease in with our own sense that something more appalling than liberal guilt is at play among the wisteria. One cheeky shot finds the protagonist catching sight of the gardener as Rose’s car winds up the driveway. We can’t make out if he is a person of colour. The very fact that we ask ourselves the question confirms the durability of racial tensions. Chris doesn’t make much of Dean’s observation that, thanks to mould, the basement is now inaccessible, but we’ve seen horror films before.

That fug of macabre and those more everyday tensions come together in a party scene that develops into a small masterpiece of sustained satire. The Stepford neighbours traverse the entire spectrum of soft-racist conversational gambits. One woman makes a crack about sexual potency. A gentleman clumsily inserts Tiger Woods into the discourse.

Peele is previously best known for the sketch show Key & Peele and – though very different in tone – that party scene confirms his gift for high-end cringe comedy. Elsewhere, Lil Rel Howery, who plays Chris’s best friend, generates broader, properly hearty laughs as he panics about his pal’s fate in distant suburbia. But Peele has also worked hard at mastering the dynamics of horror. Get Out’s opening hour cannot be faulted: the inhuman distance of the black servants is particularly unsettling.

The final, outrageous act is opened by a slightly clunky coincidence leading to guignol that is a little too grand for its own good. But Get Out gets back on track with one of the most pointedly political conclusions of any horror film. More so than that of Night of the Living Dead? Let us just say they can live happily in the same paragraph.

A film that will be mulled over for decades.

To work on TV, Normal People had to differ from the book
4

Film-maker Pedro Costa: ‘There is no Beckett or Joyce in cinema’
9

You really have to see Trump’s bizarre new painting
10