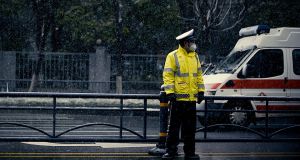 76 DAYS ★★★★★
Directed by Hao Wu, Weixi Chen, Anonymous. VOD, 93 min
Stunning documentary detailing the Chinese city of Wuhan’s journey following the arrival of Covid-19. This extraordinary film includes some shots that remind us of the wider truth – an ambulance crosses an empty bridge in an apparently deserted metropolis – but, for the most part, the focus is on hard-working individuals connecting with their frayed compatriots. It is a terrible story, but, in its constant discovery of bravery and compassion, ultimately a hopeful one. “You are all fearless soldiers,” an exiting patient declares. DC

A boy parachutes onto a mysterious island and has surreal adventures. Here’s a wondrous thing. Working from his home studio, 26-year-old Gints Zilbalodis singlehandedly crafted this gorgeous feature length animation over 3½ years. He even wrote the haunting minimalist post-Glass synth score. That alone might distinguish Away as an enchanted object. The film’s world, however, casts a more potent lasting spell. Recalls Studio Ghibli classics such as My Neighbour Totoro and The Red Turtle. A delight. TB

A sort of low-key concept film, 23 Walks imagines that two older Londoners – Dave (Johns from I, Daniel Blake) is a retired nurse, Fern (certified British treasure Steadman) a middle-class divorcee –form a friendship while walking their dogs. The relationship becomes more serious and, after challenging each other’s loyalty with awkward secrets, they stumble towards romance. It’s pretty thin stuff. The dialogue is wooden. The confrontations are contrived. But the two much-loved leads just about make it work. DC