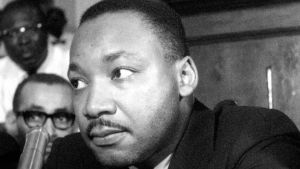 MLK/FBI documents the “darkest part of the FBI’s history” with its smear campaign against Martin Luther King.

In November 1964 Coretta Scott King, the wife of Martin Luther King Jr, received a package containing a recording of her husband’s supposed infidelities, and an anonymous letter (written by the FBI’s director of domestic intelligence operations, William Sullivan) begging the civil rights leader to kill himself.

That correspondence was just one manifestation of the FBI’s relentless COINTELPRO operation against King. More than five decades on from the events it depicts, this documentary is so alarming that interviewee James Comey feels obliged to characterise the letter and broader smear campaign as “the darkest part of the FBI’s history”.

Director Sam Pollard, who edited several of Spike Lee’s major joints, wisely glosses over the supposed contents of the FBI’s recorded surveillance of King. Those covert recordings are due to be declassified in 2027. Several contributors question the historical worth of these ill-gotten tapes.

Noted historians Donna Murch and Beverly Gage, who contributed to the excellent The Black Panthers: Vanguard of the Revolution, are joined by King’s trusted lieutenants, Clarence Jones and Anthony Young, to contextualise COINTELPRO as part of the FBI’s broader crusade against J Edgar Hoover’s ultimate fear: the rise of a Black Messiah. One internal memo refers to King as “the most dangerous negro in America”.

MLK/FBI explores the fed-friendly propaganda of movies like The FBI Story and Walk a Crooked Mile, the fear-mongering over King’s associations with communist lawyer Stanley Levison, and the sinister way in which King’s extramarital relationships were framed according to the lascivious stereotypes found in DW Griffith’s The Birth of a Nation.

Hoover, who required his recruits to fit a white, clean cut, straight male ideal, found King’s private life to be personally offensive. He sent recordings gained by wiretaps and bugs to the media and to government officials.

He was not acting alone. Robert Kennedy approved taps on King’s phones. Lyndon Johnson turned against King after the latter renounced the Vietnam War. As several contributors note, in the 1960s many Americans viewed Hoover as the hero and saw King as the villain.

Archival footage of King, including a lively interview with Merv Griffin, allows the late activist to talk us through his rise to prominence. Whatever is on those sealed tapes, there’s no quibbling with his charisma or his humanity. Pollard’s questioning, vital chronicle is a fitting tribute.

On digital platforms from January 15th