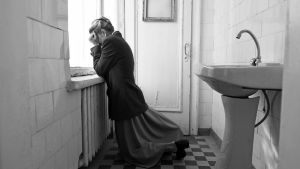 Julia Vysotskaya is electrifying as Lyuda, a dedicated party member.

Andrei Konchalovsky is cursed to forever endure opening paragraphs that point out he went from writing masterpieces such as Ivan’s Childhood and Andrei Rublev for Andrei Tarkovsky – justification enough for a place in the pantheon – to directing Sylvester Stallone and Kurt Russell in the very different (not terrible) Tango & Cash. If you can’t do the time…

Since his return to Russia, Konchalovsky has delivered a remarkably varied series of features, none better than this angry, heart-rending drama concerning the 1962 Novocherkassk massacre.

As Dear Comrades! explains to an underinformed western audience, the shooting of 26 striking workers was, for many loyal Soviets on the scene, the ultimate betrayal of the revolution and of those who sacrificed so much in the Great Patriotic War. The rest of the country knew almost nothing about it until classified papers were released in 1992.

Shooting in clean black and white with a narrow ratio, Konchalovsky and cinematographer Andrey Naydenov invite us to admire the skill of their image-making as they drag us deeper into betrayal.

The electrifying Julia Vysotskaya (born in Novocherkassk a decade after the massacre) plays Lyuda, a dedicated party member who misses the country’s most uncompromising leader. “It made sense with Stalin,” she spits at one point. Nostalgic for an even earlier era, Lyuda’s father is prone to pulling out sacred icons and donning forbidden uniforms. Her daughter is as casually rebellious as we expect daughters to be.

When electromotive workers march on the city council, Lyuda is the first to stand up and demand their execution. What follows is still disputed, but it seems a division of the KGB fired on the crowd from concealed locations. Lyuda is initially resilient, but doubts set in when her daughter doesn’t come home.

The dynamics of the slaughter are rendered in stark visual strokes. Lyuda drags a fleeing citizen into a hairdresser, only to watch as a bullet catches her through the window. The cover-up sends dead bodies to remote spots in the surrounding countryside.

Throughout it all, deadpan humour sneaks through the official responses. Someone blames the CIA for the dispute. Somebody else traces the belligerence back to the Cossacks. Meanwhile Lydia, who wears her medal ribbons on everyday clothing, confronts the shattering of her political philosophy. The point at which, now missing a child, she is asked to put her earlier urgings for slaughter into a written report is worthy of Gogol at his most bleakly comic.

There is so much to savour in this singular film, but, more than anything, it demonstrates how even the firmest conviction can wither when it comes into conflict with personal affection. Sure to be among the young year’s best films.

On Curzon Home Cinema and other services from January 15th