Stardust: David Bowie’s 1971 tour of the US was disastrous. This film about it isn’t much better 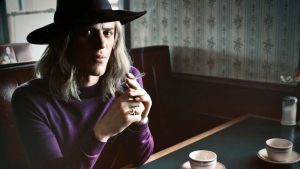 Johnny Flynn in Stardust: the movie makes exasperating viewing for fans and will baffle newcomers

Gabriel Range is best known for his interesting documentary and drama mash-ups, The Day Britain Stopped (2003) and Death of a President (2006). Stardust, the director’s lightly experimental David Bowie biopic, is not short of ambition.

A Ziggy Stardust origins story and a chronicle of Bowie’s disastrous 1971 US tour, the film is anchored by a fantastic and enigmatic turn from Johnny Flynn (Beast, Emma). His Bowie is vulnerable, teetering towards career implosion, and terrified of succumbing to the mental illness that has affected his beloved big brother Terry (Derek Moran).

A repeated visual of Bowie in a spacesuit, a gesture to the earlier success of Space Oddity and an effective encapsulation of his feelings of isolation, is rather wonderful.

The film’s central flimflam, however, is not. As Bowie’s estate did not approve the film and did not grant rights to use Bowie’s music, Stardust introduces a slightly inept, well-meaning American tour manager Ron Oberman (Marc Macron). He greets the British musician with some terrible, copyright-related news: due to a visa mishap, Bowie will be able to give interviews, but will not be permitted to perform. Or at least not from the Bowie back catalogue: we do see Flynn’s Bowie performing The Yardbirds’ I Wish You Would and Jacques Brel’s My Death.

For all Flynn’s good work, this makes for a drama that struggles to justify its own existence. Bowie might have been chameleonic and otherworldly, but this is a portrait of a musician who simply isn’t there.

The script, co-written by Range and Christopher Bell, offers up a listless odd couple road movie featuring Bowie and Oberon, exasperated phone calls from Angie Bowie (the always committed Jena Malone), and a few heady parties. Encounters with variously frustrated rock journalists and radio hosts allow for less insight into Bowie than, say, his performance in The Man Who Fell to Earth some five years later.

Exasperating viewing for fans and certain to baffle newcomers, it’s a curious, imaginative thing, but who exactly is it for?