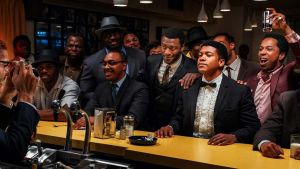 One Night in Miami imagines that, on the night after Cassius Clay’s defeat of Sonny Liston, the fighter who was about to become Muhammad Ali gathered with Sam Cooke, Malcolm X and American footballer Jim Brown in a Florida hotel room.

Film Title: One Night in Miami

This awards season (yes, it’s happening) we are again being asked if it matters whether a filmed play satisfactorily escapes its theatrical roots. Nobody could have mistaken Ma Rainey’s Black Bottom for anything else. But Regina King’s engaging clash of cultural icons – a sophisticated variation on the “your dream dinner party” parlour game – works a little harder to shake off the proscenium arch.

Mind you, there was only so much King could do. Kemp Powers’s One Night in Miami, a hit on stage in LA and London, imagines that, on the night after Cassius Clay’s defeat of Sonny Liston, the fighter who was about to become Muhammad Ali gathered with Sam Cooke, Malcolm X and (apologies to US readers for a necessary clarification here) American footballer Jim Brown in a Florida hotel room.

The confinement is the point. Pressed together in a small space, each man is forced to confront his responsibilities to the black struggle. King does bring us elsewhere – the Liston fight, some chatter outside the motel – but this remains, for the most part, a claustrophobic chamber piece.

Those few moments of escape offer tantalising possibilities. A brilliant early scene has Brown (Aldis Hodge) visiting an old mentor (Beau Bridges) in the South and, after a seemingly amicable conversation on the porch, being told, in chillingly matter-of-fact tone, that “you know we don’t let [n-word]s in the house”.

The older character thinks he is laying out an unremarkable truth. Nothing that follows has similar punch. There are many powerful and inspiring speeches. But that sparely written scene on the porch – as much about Brown’s silence as the older man’s naked racism – offers an inherently cinematic frisson. Elsewhere, the whiff of limelight prevails.

That noted, few upright viewers will resist the enthusiastic performances from a cast of emerging stars. Kingsley Ben-Adir, a Londoner who has hitherto excelled on stage, offers us a warmer, less angular Malcolm X than we got from Denzel Washington in Spike Lee’s biopic.

In 1964, Malcolm and Clay were about to make journeys in opposing directions. The activist had seen through Elijah Muhammad, fraudulent leader of The Nation of Islam, and was set to leave that cultish organisation (perhaps precipitating his own assassination). Attracted to the movement in part by Malcolm’s involvement, the boxer planned to change his name and proselytise for the Nation.

Some historians of Malcolm’s struggle may balk at this more cosy, occasionally avuncular take on the revolutionary, but Ben-Adir permits jutting rocks to show through the rapids at all times. Better than anyone else, he understands the need for black personalities to take a stand in the coming conflict.

One doesn’t envy any man playing Ali, but Eli Goree, an up-and-coming Canadian, can’t claim he has no footage to work from. He creates a character that respects our memory of the real thing without drifting into impersonation. There is strength here, but there is also great insecurity.

Aldis Hodge, so good as MC Ren in Straight Outta Compton, gives us the least agitated of the quartet. Leslie Odom Jr, who originated the role of Burr in Hamilton, has the voice and the charisma to, as Cooke, shoulder the story’s defining arc. The singer, who launched his own record label, initially believes that, not explicitly political, he has scored a success for African-Americans by beating the establishment at its own game. A late musical number confirms eventual political awakening.

Again, that affecting cinematic moment feels so much lighter than the dense dialogue that packs the characters tight in the main body. It’s not so much the confinement that telegraphs the theatricality as the actors’ habit of delivering lengthy speeches to themselves, their comrades and to an imagined audience in the highest balcony.

They just about get away with it. But too much of One Night in Miami feels blinded by the footlights.

Ireland Says Yes: The Inside Story of How the Vote for Marriage Equality was Won – Book Review