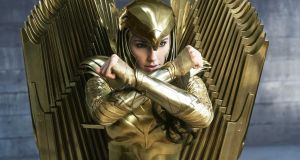 WONDER WOMAN 1984 ★★★☆☆
Directed by Patty Jenkins. Starring Gal Gadot, Chris Pine, Kristen Wiig, Pedro Pascal, Robin Wright, Connie Nielsen. 12A cert, gen release, 150 min
Wonder Woman fights a variation on Catwoman (Wiig) and a variation on Lex Luthor (Pascal) in a satisfying follow-up to the smash original. Jenkins, returning for more action, has made the sensible choice to rhyme much of WW84 with Richard Donner’s well-remembered Superman films. The DC Extended Universe has a few house styles and much better is this playful tone than the deafening pseudo-despair of Zack Snyder’s contributions. Unfortunately, it begins to take itself seriously in a lengthy final act. Wiig and Pascal just about keep it honest. DC

Solid, well-acted adaptation of August Wilson’s play concerning the Queen of the Blues (Davis, predictably electric) and her attendant pages. There are musical differences with the egotistical trumpeter Levee, magnetically realised by the late Chadwick Boseman in a final performance that recalls his dazzling depiction of James Brown in Get On Up. These scuffles are beautifully lit by Tobias A Schliesser’s cinematography, but theatre veteran Wolfe is mostly happy to film the play, rather than expand and dilute the material into a larger space. TB

Mysteries abound in rural Montana during the early 1960s. Pitched somewhere between the Coens’ No Country for Old Men and the hicksploitation bits from Nocturnal Animals, this gripping neo-western contains all that’s good and bad about death in American movies. Earthy, engaging performances from Lane and Costner ground the film’s more preposterous twists and turns as their ageing ranchers take on some bad good ol’ boys. Director Bezucha, adapting Larry Watson’s novel, keeps a vice-like hold on the viewer’s attention. TB

Dignified, unflashy record of David Byrne’s Broadway show – a few songs from the eponymous 2018 album mixed in with many more from the back catalogue – that works as an irresistible Christmas gift for fans of Byrne and Talking Heads. The generosity of the politics is echoed in a set list that gives dedicated fans what they want. There is something from Fear of Music. There is a bit from Remain in Light. It’s much more polite and disciplined than the legendary Stop Making Sense, but almost as persuasive. DC