For someone embedded in the Red Army, Valery Faminsky did not take sides when witnessing first hand the collapse of Nazi rule 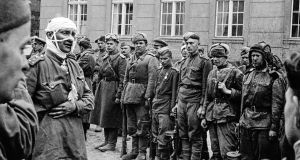 The only surviving member of a tank crew, Eastern Germany, near the Seelow Heights, April 1945. Photograph: Valery Faminsky

Office staff lined up to offer him greetings in the bunker of the New Reich Chancellery. After stepping outside to pat the shoulders of a few boys barely into their teens, he vanished back underground: the Hitler Youth detachment witnessing the Führer’s last public appearance. It was April 20th, 1945, not only Hitler’s birthday but the day that the Red Army opened its assault on Berlin’s city centre.

Had Hitler ventured any further than the Chancellery gardens, he would have seen grim evidence of the city’s most destructive air raid by more than a thousand American bombers the month before. Worse was to come as the increasing volume of rumbling thunder from artillery shelling indexed the proximity of Soviet troops. By April 29th, there was gunfire inside the capital’s innermost three defensive rings that Hitler had ordered defended “to the last man and the last shot”. The following day, he committed suicide.

Valery Faminsky was 31 when he accompanied the Russian advance into the suburbs of Berlin and the heart of the centre. A photojournalist with experience on various fronts in eastern Europe, his present job was compiling photographic documentation of medical facilities for wounded soldiers. Army accreditation enabled him to move freely around the city and witness first hand the collapse – physical, psychological and ideological – of Nazi rule.

Far exceeding his brief, Faminsky took his own photographs of German civilians and Soviet soldiers in scenes of non-combatant life. When the war was over, he returned to Moscow with his archive of negatives and it seems they remained unknown until after his death and his wife’s. They were discovered by relatives who, having little interest in the collection, put them up for sale on the internet.

Purchased in 2017 by a photographer (both of whose grandmothers had been taken as forced labour from Ukraine to Germany), their importance was recognised and they have now been published in a German/English edition.

The battle in Berlin lasted until May 2nd and its intensity took a toll on everyone in the city. Starting with tanks and howitzers, it ended with flamethrowers and house-to-house street battles with grenades and machine guns; in the Reichstag it came down to room-to-room fighting. In all, the battle killed some 175,000 German and Russian soldiers and more than 20,000 citizens.

After the fighting, sexual violence against women occurred on a terrifyingly scale – 100,000 might be a conservative estimate of the number of rapes – driven primarily, says the historian Richard J Evans, by hatred against the enemy nation. Millions of citizens had been slaughtered in the Nazi invasion of Soviet lands and defenceless adults encountered by vengeful soldiers in Berlin were mostly women.

Faminsky’s photographs are unlike other familiar and famous second World War pictures, such as the raising of the red flag over the Reichstag or the US flag on Iwo Jima. The first of these was a staged photoshoot and perhaps the Iwo Jima one was as well, but there is no evident journalistic impulse in Faminsky’s work.

When he is present at a reading of the official German surrender on May 8th, he positions himself close to the officer with a megaphone and frames the untheatrical scene around him: a quiet street with two young women looking at something behind the announcer and an audience of a handful of children. The impact of seeing what constitutes a historic moment in world history is less than awesome; a young boy, his attention on the Soviet vehicle parked on the road, ignores it completely.

The iconic photographs of flags over the Reichstag and on Iwo Jima are invested with a sense of the heroic. The soldiers become actors in an action-based drama, protagonists aware of their role in a mighty historical conflict. The compositions possess an artistry and can be imagined covering large canvases in the high style of history painting. What we see may not have the documentary transparency we wish to give them but such moral worth is attached to what the symbolic acts proclaim – the defeat of fascist ethno-nationalism – that the photographs’ representations are imbued with a tremendous poetic truth value.

Faminsky is not averse to focusing the lens of his Leica on soldiers and high-ranking officers in the last days of the war and the first days of peace. But heroism is muted and they are shown instead in ordinary situations such as visiting the wounded, cleaning their rifles, socially passing the time looking over a magazine or posing before a tank.

Pathos is subdued, something that comes across strongly in a set of three photographs taken when a troop of around 30 men gather on a pavement. They are addressed by the sole surviving and heavily bandaged member of a tank crew before firing their weapons in the air in memory of those who did not survive.

What we see are the faces of individuals going about an unstaged act of commemoration that is necessary and probably heartfelt but not an occasion for expressions of anguish. Catching unrehearsed moments of reality like this one goes to the heart of what documentary photography at its best is all about.

Faminsky’s eye, drawn not towards triumphalism but the plight of humans, is far from blind to German civilians sharing the streets with him as he moves around the defeated capital. Many of the more than 100 pictures in this finely designed photobook are a response to their presence. Mostly women, children and older men, they had sheltered in candle-lit cellars and emerged to struggle for existence in a shattered world.

The omnipresent background of collapsed buildings and broken masonry come to signify not just leftovers of human habitats but fragments of a broken social and ideological order. People toil for food and shelter, clinging to their disoriented sense of identity as precariously as the physical ruins that around them defy gravity and remain standing.

Every Berliner is carrying something, precious or vital possessions, in bags or bundles. A lone female seen reading a letter is a rare moment of intimacy but, given the violence unleashed on women, anomalous. Whether the photographer was aware of the systematic rapes taking place inside the ruined buildings is unknown.

The aesthetic quality of Faminsky’s work – street photography in extremis (there are only a handful of indoor shots) – rests on empathy for the suffering of war’s survivors but compassion is kept at a respectful distance and there is no emotional indulgence in the pain of others. The making do with severe deprivation is not exhibited for its own sake and the recording of it remains restrained, like the arm of the Soviet tank commander held to support one side of his wounded body.

For a war photographer, not just embedded in his country’s army but employed by it, Faminsky’s ability to not take sides is extraordinary. His pictures of Soviet soldiers carrying and caring for their comrades on horse- and dog-drawn stretchers and waggons align themselves with scenes of civilians pulling wheeled carts of luggage. He is not even an unconscious propagandist for those on the winning side.

Berlin’s terrible reckoning was not just for its adult citizens, many of whom in different ways and degrees bore some responsibility for the Nazi horror. There is something unseemly in the attributing of collective guilt to an entire people but it is unavoidable, and postwar Germany came to acknowledge this in exemplary ways.

It was also a reckoning time for Soviet citizens who had borne arms in a de-civilizing conflict that had finally reached its end. As many civilians had died as soldiers, a staggering 20 million lives in Europe alone (combined American and British losses were one million) but this did not prevent a young Russian photographer from looking at Berliners on the street and seeing them more as victims than enemies.

The singular achievement of Valery Faminsky, born in Moscow in 1914 to parents who served in the ranks of the Red Army from the October Revolution to the end of the civil war, was to bear witness for posterity to the aching ordeal of Soviet and German men and women who survived and suffered in Berlin in May 1945.

Berlin May 1945 is published by Buchkunst Berlin.

Kathleen Edwards: ‘I became terribly depressed and needed something to change’
6