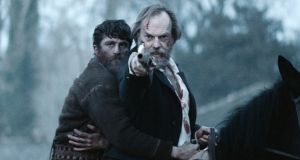 The first clips of Lance Daly’s Black 47, a rare feature centred on the Great Famine which premieres tonight at the prestigious Berlin Film Festival, have been released.

Hugo Weaving and James Frecheville star in the tale of an Irishman serving with the British army who returns home to face unimaginable suffering.

The film seeks to explore the tragedy through the medium of a mainstream thriller. Daly has drawn together a strong Irish cast including Moe Dunford, Sarah Greene, Stephen Rae and, winner of an Ifta this week, rising Dubliner Barry Keoghan.

Daly, director of the acclaimed indie Kisses, has been circling the project for some time. Eugene O’Brien, writer of Red Rock and Pure Mule, and PJ Dillon, one of our best cinematographers, are among those collaborating on the script.

“The film is an action-revenge drama,” Daly told The Irish Times. “But I hope that through these characters the story of the Famine is told. I don’t know how else to do it. To do it another way might have been voyeuristic and horrible.”

The Berlin Film Festival is one of the three most important events in the European cinema calendar. Like the Venice and Cannes festivals, it attracts a massive press pack and a large number of industry professionals to its busy market. This year’s event began on Thursday night with a well-received screening of Wes Anderson’s animation Isle of Dogs. The main competition – for which the Golden Bear is awarded – screens anticipated new releases by directors such as Gus Van Sant, Christian Petzold and Lav Diaz.

Black 47, playing out of competition in the official selection, already has distribution in the UK, Germany and Ireland. The team from Fastnet Films will be seeking to sell the picture to as many territories as possible over the next week. Other production partners include the Irish Film Board, the Luxembourg Film Fund, Wildcard Distribution, TV3 and the Broadcast Authority of Ireland.

Black 47 will open the Audi Dublin International Film Festival on Wednesday. A commercial release follows later in the year.