In this Irish Times video, the Stan & Ollie stars talk about Irish trips and fat-suit acting 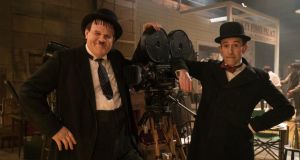 There could be no better place for Steve Coogan and John C Reilly to discuss Stan & Ollie, a charming study of Laurel and Hardy in their later years, than the stage of the Olympia Theatre in Dublin. The building is almost in the film. Jon S Baird’s drama follows the pair on a tour of the UK and Ireland in the 1950s. The Olympia does not actually appear, but we do get to celebrate the pair’s triumphant arrival in Cobh, in Co Cork.

Laurel and Hardy appeared at the Olympia in 1952 and then again in 1953. Some years ago, writing in this paper, Stephen Dixon, an expert on British comedy, dug up the Evening Herald’s review of that first appearance.

“On to the stage strode a little man wearing a broad, benign grin, a pair of big, baggy trousers, a battered bowler, and carrying what once upon a time might have been a respectable-looking violin case,” the reviewer wrote. “The crowd roared with delight, only to break into a howl of mirth a moment later when he was followed by a somewhat large gentleman, with a worried countenance and a gleam in his eye that spelled trouble for the little man with the benign grin.”

Although well remembered by older fans, the team had been largely abandoned by Hollywood. Stan & Ollie, featuring Coogan as a perfectionist Laurel and Reilly as a worried Hardy, follows their struggles with declining audiences and stubborn, unhealed professional disputes.

They got on well with Ireland. In 1953 the two men returned and, while staying at the Royal Marine Hotel in Dún Laoghaire, worked on a new sketch called Birds of a Feather. That piece had its first performance during a charity gig at the Olympia.

As Stan & Ollie opens across Ireland, Coogan and Reilly – both dressed in mid-20th-century splendour – occupied the stage for a series of video interviews. Coogan remembered his own journeys to Ireland as a child. Reilly discussed the difficulties of acting with an XXXL fat suit. Jon S Baird argues that most of what you see is true. It’s as if they’ve never been away.