The Judge: A woman in a very male world of sharia courts

Review: Documentary reveals life beyond for the courtroom for a mould-breaker 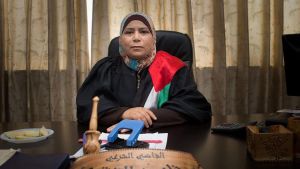 The Judge: Kholoud Al-Faqih, the first woman appointed to a Shari’a court in the Middle East

In 2009, with the support of a progressive Sheikh, Dr Kholoud Al-Faqih became one of only two women appointed as judges in the sharia courts in Palestine.

Watching Erika Cohn’s fascinating documentary portrait, you may wonder how the West Bank ended up with quite so many women in the job. “There are many evils associated with this and it conflicts with the Sharia”, cautions Islamic scholar Husam Al-Deen Afanah. A quick vox pop suggests he’s not alone in that view.

“Men can separate their minds and hearts so their judgment is better than women’s,” explains one young woman.

Women have served as judges in Palestinian criminal law courts since the 1970s, but they had never served in Sharia courts, where Islamic jurisprudence is dispensed in matters as mundane as child support and inheritance divorce, and as culturally specific as honour killings.

A lawyer who specialises in domestic abuse cases, Faqih argued that the Hanafi school of Islam doesn’t forbid women from running Sharia courts. The chief justice, Sheikh Tayseer Al-Tamimi, concurred, and Faqih  and Asmahan Al-Wahidi were given positions on the bench.

Tamimi was forced to resign one year after those appointments Faqih and Wahidi and while it’s never stated explicitly, it’s implied that support for these women led to his departure. Without his support, Faqih suddenly getting finds her caseload getting lighter, a situation she is not willing to take lying down.

There are intriguing glimpses of her life beyond work, as a mother of four, as a wife, and as the daughter (one of 12 siblings) of elderly parents.

Amber Fares, who directed Speed Sisters, a documentary depicting the first all-women race car driving team in the Middle East, brings bright, breezy cinematography. Erika Cohn, the Emmy-winning director of In Football We Trust, ensures the film is every bit as indomitable and irresistibly jolly as its subject.