‘We are beyond delighted’: The Favourite scoops 12 Bafta nominations

Irish-produced movie chased by Rhapsody, First Man, Roma and A Star Is Born

'The Favourite', directed by Yorgos Lanthimo, is an Irish production from Element Pictures 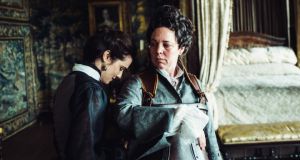 Bafta front runner: Rachel Weisz and Olivia Colman in the Irish-produced film The Favourite, which has 12 nominations

Yorgos Lanthimos’s The Favourite, an Irish production from Element Pictures, has secured 12 nominations at this year’s British Academy Film Awards.

The crafty, dark comedy, relating intrigues at the court of Queen Anne, was way ahead in the Bafta nominations chart. In joint second place, with seven nominations, were Bohemian Rhapsody, the hit biopic of Freddie Mercury; First Man, a study of the astronaut Neil Armstrong; Roma, Alfonso Cuarón’s acclaimed Mexican drama; and A Star Is Born, Bradley Cooper’s show-business yarn starring Lady Gaga.

The Northern Irish film-maker Chris Kelly was nominated in the best-British-debut race for writing, directing and producing the epic documentary A Cambodian Spring.

Scoring with just about every category in which it seriously competes, The Favourite could hardly have done better with the British Academy of Film and Television Arts.

Olivia Colman, recent winner at the Golden Globes, who plays the queen, will surely go forward as favourite for best actress. Both Rachel Weisz and Emma Stone, who play rivals for her attention, are nominated as best supporting actress.

Ed Guiney, the experienced Irish producer and cofounder of Element Pictures, is among those nominated for best film and best British film. (As a coproduction, The Favourite qualifies for such awards at both the British and Irish academies.)

Guiney awoke early in the United States to hear the actors Will Poulter and Hayley Squires read the nomination at Bafta in London. He told The Irish Times: “We are beyond delighted with these nominations, and it’s great to see so many of our brilliant heads of department being nominated alongside our wonderful cast, writers and director. This also sets us up very well as we go deeper into awards season.”

Many in the Irish industry will be happy to see a nod in best cinematography for Robbie Ryan. The Dubliner, who has previously worked on such films as I, Daniel Blake and Philomena, also picked up a nomination for the American Society of Cinematographers awards on Tuesday.

He and Guiney can reasonably expect mention when the Oscar nominations emerge on January 22nd.

The Favourite has also done well with audiences, scoring close to €4.5 million in its first week at the UK and Irish box office.

“We developed The Favourite for 10 years,” Guiney, said. “We attached Yorgos. We used Irish Film Board money and continued to develop it with our team in Dublin.”

Jessie Buckley, from Co Kerry, and Barry Keoghan, a Dubliner, had already been announced among the five nominees for EE Rising Star award. That gong is the only Bafta to be decided by a public vote.

There is considerable overlap between the memberships of Bafta and the Academy of Motion Picture Arts and Sciences, which votes on the Oscars. The Bafta nominations are therefore read closely for pointers to the US awards.

Also nominated for best film were Roma; A Star Is Born; Spike Lee’s BlacKkKlansman, the story of the African-American cop who infiltrated the Ku Klux Klan; and Peter Farrelly’s Green Book, a crowd-pleasing drama about a black pianist touring the US south in the 1960s.

Despite its shock triumph at the Golden Globes as best drama, Bohemian Rhapsody, a British coproduction, could not manage a best-film nomination, but its seven nods and spectacular takings – it is among the 10 highest-grossing 2018 releases worldwide – counts as a triumph after a troubled production and indifferent reviews.

First Man, well reviewed but weak at the box office and at early awards, has, perhaps, done a little better than expected. Claire Foy, who played Armstrong’s wife, Janet, is nominated for best supporting actress, and the film also received mention for its screenplay, cinematography and score.

There will be some raised eyebrows at the underperformance of three films focusing on African-American concerns (although, to be fair, two of the five best-film nominees meet that definition).

The apparently unstoppable march of Black Panther, a flashy superhero epic, towards a best-picture Oscar nomination is unlikely to be much retarded by its scoring just one nomination from Bafta (for effects).

But Regina King, favourite for the Oscar, will be disappointed not to have been mentioned in the best-supporting-actress race for her turn as a distraught mother in Barry Jenkins’s beautiful If Beale Street Could Talk.

The British director Steve McQueen will also be grumbling at the news that only Viola Davis, mentioned for best actress, is up for his crime epic Widows.

Mike Leigh’s Peterloo was, unusually for a film from that director, completely overlooked by Bafta, but, following its mixed reviews, few will have been overly surprised.

No feature by a woman secured a best-film or best-director nomination. Lynne Ramsay’s excellent You Were Never Really Here, which was mentioned in the best-British-film competition, must register as another underperformer. That was the film’s only nomination.

Given Bafta’s traditional lean towards domestic productions, The Favourite has every chance of scoring the most wins when the ceremony, hosted by Joanna Lumley, takes place at the Royal Albert Hall, in London, on February 10th. These are the most prestigious film awards outside the United States.

BlacKkKlansman
The Favourite
Green Book
Roma
A Star Is Born

Outstanding debut by a British writer, director or producer

Best film not in the English language

Incredibles 2
Isle of Dogs
Spider-Man: Into the Spider-Verse

Glenn Close, The Wife
Lady Gaga, A Star Is Born
Melissa McCarthy, Can You Ever Forgive Me?
Olivia Colman, The Favourite
Viola Davis, Widows

EE Rising Star award (voted for by the public)

Robert Eggers on bringing Robert Pattinson to The Lighthouse
10