Starring John Connors (King of the Travellers, Love/Hate), Carboard Gangsters follows a group of wannabe gangsters as they attempt to gain control of the drug trade in Darndale. 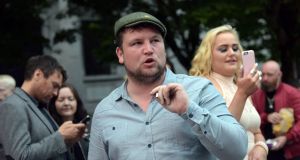 “I can’t watch my own films,” says Mark O’Connor. “All I can see are mistakes.” He winces and blushes at the very idea: “Flaws everywhere. Just… no.”

The director behind Between the Canals and King of the Travellers is such a quiet, unassuming fellow it’s easy to forget that he’s one of this country’s most formidable film talents. Today he’s dressed more like a teacher than a movie director; sure enough, he has just come from teaching a class on screenwriting.

“I’m still working out what the hell am I as a film-maker,” he says. “They always start out like social realism. But then…”

Another artist might be tempted to crow if they had just won three awards at Manchester International Film Festival. O’Connor seems genuinely taken aback. “I couldn’t believe it. I wasn’t sure that something so local would travel or work with international audiences. But they went mad for it.”

They sure did. Last March, Cardboard Gangsters – O’Connor’s fourth feature – took home prizes for Best Actor (for the fantastic John Connors), Best Feature Film and Film of the Festival from Manchester. It received additional special jury mentions for original screenplay, directing and cinematography.

Across the Atlantic the programmers at the Newport Beach festival were similarly impressed. “[Cardboard Gangsters] has the feverish temperament of a Guy Ritchie picture, the ghetto angst of Danny Boyle’s Trainspotting, and the realism of Ken Loach and Mike Leigh’s finest films. Unflinching, sadistic, and unabashedly realistic.”

Not bad for a film that, as the film-maker notes, “was rejected by everybody from the get-go”.

I don’t miss that struggle of independent cinema. Not a bit

Of course, by now O’Connor is accustomed to swimming against the tide. In 2014, Stalker, the director’s sophomore feature (made for a minuscule €15,000), became the first crowdfunded Irish feature to receive a theatrical release.

“It was tough going,” he recalls. “I’m talking to Amazon at the minute and I’m developing a TV series. And I don’t miss that struggle of independent cinema. Not a bit.”

In 2013, O’Connor made the much-admired bare-knuckle fighting drama King of the Travellers despite universal discouragement. “People told me not to make a film about Travellers,” he told this newspaper at the time. “They said nobody wanted to see that.”

Cardboard Gangsters (which might just as easily be called Straight Outta Darndale) is possibly an easier sell. The new film follows Jay Connolly (Connors), an aspiring DJ whose welfare is cut off just as a loan shark begins to terrorise his mother.

With few other options, Jay and his buddies transition from small-time drug deals to selling heroin, a business plan that soon attracts the attention of smack dealer and neighbourhood terror Derra Murphy (Jimmy Smallhorne).

O’Connor, who co-wrote the screenplay with Connors, is tickled by RTÉ’s Ryan Tubridy’s description of the film as “a mess… but a beautiful mess”.

All I’ve ever wanted to do is make beautiful messes

“I like when scripts go off in tangents,” he says. “I like when Di Caprio is crawling down the stairs in Wolf of Wall Street. Some of best moments in cinema are simply about being in the moment. Film doesn’t have to be bang, bang, this happens, then this happens next.

“All I’ve ever wanted to do is make beautiful messes. As much as I love plot-driven films, I find you never rewatch them. I’m not a structure person.” He laughs: “You should see my car.”

He’s being too modest. Cardboard Gangsters may contain scenes of exuberance and death-defying sessions, but it slots neatly into the ’hood subgenre: picture a localised marriage of La Haine and Boyz N’ The Hood.

“I do love that genre,” says O’Connor. “Boyz N The Hood, Menace to Society, Paid in Full. Ours is a ’hood film, not a gangster film. It’s young men, living in a deprived area, who get an opportunity to make some money by dealing drugs. They haven’t grown up yet. They haven’t found their place in society. They’re young, not psychopaths.”

Cardboard Gangsters strikes an impressive balance between the attractions of thug life – pill-popping, alcohol, and “session mots” set against a killer soundtrack by Darndale’s God Collective (aka Darren Dwyer) and by regular O’Connor score contributor Damien Dempsey – and the gruesome gangland consequences.

“I call it flamour: glamour in film,” laughs the director. “Every film needs flamour. I don’t mean pretty people and nice things. I mean it has to have something – doesn’t matter if it’s a horror or a superhero film or any other genre – that catches your eye and pulls you in. Something that makes you think ‘I really want to see this’.

“I think when you’re making a social-realist film set in a deprived community like this one is, it can just become really depressing and juddery to look at. But you’ve got to show the other side of criminality, because it does exist. You have to show the lads having great craic and the fun. Because that’s what these guys do.”

To this end the production required the lads at the centre of the drama to share a house for several weeks before the shoot. More than 90 per cent of the cast of King of the Travellers came from the Travelling community. While the film-maker has moved on from that idea, he remains faithful to the communities he depicts on film.

“When you’re not from the place you have to be careful about how you are representing that community. With some the previous films I was almost too focused on the community. I wanted to cast all non-actors. And while I’m very happy I did that back then, now I’ve learned a bit more about casting.

“ It’s different when you’re doing a crime film. Because it has to feel authentic. There still are not that many [actors] who are from a working-class background and who can be realistic. So it’s about finding a balance.”

Following on from Stalker and King of the Travellers, Cardboard Gangsters marks O’Connor’s third collaboration with the talented writer, documentarian and star John Connors.

Think of Tommy in Goodfellas. He’s funny and he loves his mother. But he’s still dangerous

Connors, who played the bomb-maker who took down drug lord Nidge in the hit TV show Love/Hate, anchors the new film with a remarkably modulated performance that flips between softness and steel.

“We wanted him to have that coldness as well as emotional depths,” says O’Connor. “We didn’t want to make him a likeable character, but we didn’t want audience to not connect with him either. Think of Tommy in Goodfellas. He’s funny and he loves his mother. But he’s still dangerous.”

A cinephile who knows his way around the nouvelle vague and who named two pigeons in his second feature after Jean-Luc Godard and Pier Paolo Pasolini, O’Connor has big plans to connect grand old Irish characters with contemporary Irish cinema. You can see that instinct powering along King of the Travellers and Cardboard Gangsters.

“I’m trying to find an Irish voice. I’d love to see that Irish character – the wild Irish man or the wild Irish woman – on screen. Think of Gráinne Mhaol or The Dubliners. It’s there in John Ford’s The Quiet Man. It’s in Shane MacGowan.

“Maybe it’s because I’ve spent time away from here – I lived in New York for three years, and I lived in London after that – maybe you have to step away to love that romanticised version of Irishness.”