The King: A rambling ride in Elvis Presley’s Rolls-Royce 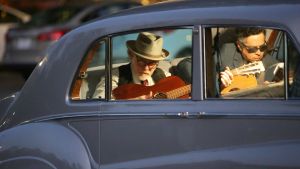 Less than an hour into Eugene Jarecki’s sprawling documentary The King, the director turns to the chief of his road crew. “What do you think I’m doing with this movie?” asks Jarecki, the award-winning film-maker behind Freakonomics, Why We Fight and The Trials of Henry Kissinger.

The chief doesn’t know any more than we do. Even the pitch is a bit of a drunken scribble. Jarecki crams musicians (M Ward, John Hiatt, the Handsome Family) into the back seat of Elvis Presley’s Rolls-Royce and lets them play while he tears about Tupelo, Memphis, Nashville. Even with this reasonably simple task, The King soon loses its way, alternating between ace live backseat performances from Emi Sunshine – oh boy, can that girl yodel – and strange jarring lip synch offerings from Immortal Technique and The Handsome Family.

Mostly, The King really, really wants to be an ill-defined film about the US and Donald Trump. Or something. “Your metaphor, it’s a reach,” tuts The Wire creator David Simon, who rightly suggests Jarecki would have been better off using one of Elvis’s many Cadillacs.  By the final reel, we’re in full sub-Adam Curtis mash-up mode. Here comes Shock and Awe, 9/11, strippers, money, and industrial decay. We literally – no fooling – get a shot of rolling casino dice to usher in the Trump era.

For all that, there’s some great banter about race and appropriation. Chase outlines the complicated evolution of Hound Dog from a tune penned by Jewish songwriters Jerry Leiber and Mike Stoller for Willie Mae “Big Mama” Thornton. Ironically, it falls to Chuck D who once wrote off The King in Fight the Power – “Elvis was a hero to most/But he never meant shit to me” – to defend Presley from charges of cultural appropriation.

You couldn’t say this entirely unfocused film isn’t without insight or incident. Shot over several years with the 40th anniversary of Elvis’s death in its sights, we get Alec Baldwin seeming certain that Trump won’t win. Michael Myers chips in with notes from Canada. Aston Kutcher is surprisingly poignant on the matter of celebrity. Ethan Hawke turns out to be a sharp-shooting Elvisologist.

It’s all rather random, but never dull.