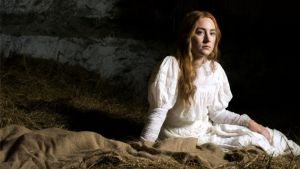 Nina, channelling a far less wily variant of All About Eve’s titular go-getter, is making eyes at Boris: “What’s it like being famous?” she simpers.

Masha’s mother, Polina (Mare Winningham), is madly in love with Doctor Dorn (Jon Tenney), who has other women. Everybody is unhappy. And you thought the albatross was the unluckiest coastline bird.

The male characters are as earnest as the females are pantomime. “I don’t have the power to stop loving you,” gasps a typically anguished Constantine.

This isn’t a movie. It’s tonal warfare. It’s not Moss’ fault. It’s nobody’s fault, There is no definitive screen version of Chekhov’s testy, meta-textual play, The Seagull and with good reason.

Away from the stage – and sometimes on the stage – it’s as mad as a box of frogs. Writer-director Mayer does everything he can to remind you that this is a comedy and everything he can to make it look like a film. But the material stubbornly refuses to congeal into a movie shape. And the constant, desperately overcompensating camera movement makes one want to smash the dolly. The October Revolution can’t come soon enough.