Review: Two compelling people attempt to rekindle a flame that can only burn both 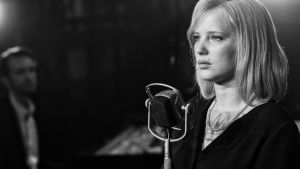 Nobody does doomed romance better than Pawel Pawlikowski (My Summer of Love) and Cold War is the director’s doomiest romance yet. Love is not enough in this sorrowful, swooning Soviet-era heartbreaker. As the film opens it’s 1949, and composer and pianist Wiktor (a soulful Tomasz Kot) is travelling around the Polish countryside with his ethnomusicologist partner, Irena (Agata Kulesza), and a stiff state-sanctioned official, Kaczmarek (Borys Szyc).

Together they scour villages, recording folk ballads and choosing various lucky peasants to come to a house where they will rehearse song and dance numbers, proto-X Factor style, in order to form a supergroup to tour the Eastern Bloc.

Wiktor is immediately taken with blonde, cherubic singer-dancer Zula (the mesmerising Joanna Kulig). She is not at all what they are supposed to be looking for. She comes from the city, not the mountains or villages. She auditions not with a folk song, but with a musical number from a Russian movie. She has also been in trouble with the law, having knifed her father for, she says, mistaking her for her mother.

A smitten Wiktor concedes that her voice is not a pure as that of some of the other girls, but insists that she has “something else”. The pair soon embark on a passionate affair and Zula becomes the star attraction of the folk ensemble, as they travel around performing traditional airs and occasional salutes to Stalin.

When the troupe reaches East Berlin, the pair have a clear chance to defect but it soon becomes clear that only one of them has any desire to cross the Iron Curtain.

Thus begins a decade of border-crossing, of partings and reunions. Lukasz Zal’s sumptuous lighting and Academy-ratio lensing confirms the film as a sister project to the equally lush Ida and places literal visual constraints on the star-crossed lovers.

Politics are mostly metaphorical. There are certain parallels with The Unbearable Lightness of Being and with Drake Doremus’s transatlantic romantic tragedy Like Crazy, as Wiktor and Zula transition through make-ups and break-ups. He does not care for the perceived order and constraints of communism; she, on the other hand, can scarcely hide her disdain for his Parisian jazz scene.

Might it be that their love could only thrive as teacher and student in the Soviet Bloc? Cold War fashions two compelling, maddening people attempting to rekindle a flame that we know can only burn them both.

Whatever the aesthetic worth of the corny faux-folk that brought them together, western music – watch out for the scene with Bill Haley’s Rock Around the Clock – is one of the many things that will tear them apart.

Almost indecently moving and easily one of the films of the year.