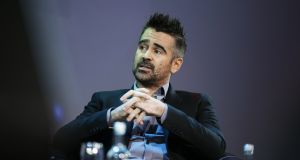 Colin Farrell: ‘When I went away, I always felt I was representing Ireland in some way.’ Photograph Nick Bradshaw for The Irish Times

“I never went to one just as a fan – it’s still one of those pipe dreams,” Colin Farrell says of attending international film festivals across the globe. Speaking to Gráinne Humphreys, director of the Virgin Media Dublin International Film Festival (DIFF), Farrell recalls the first time he attended the Dublin festival back in 1997.

The young Dubliner had just appeared in a breakthrough role alongside Eva Birthistle and Andrew Scott in the Owen McPolin-directed drama, Drinking Crude.

“I remember that one [screening] very vividly, in the Screen cinema behind Pearse Street,” Farrell notes. “That was the night I met Lisa Cook of the Lisa Richards agency, and that led to other things. It’s an absolute origin story for me.”

Four years later, Farrell was back on home soil for DIFF, this time for the Irish premiere of Tigerland, in Cineworld on Parnell Street. By 2001, Farrell had been enjoying no shortage of global movie star acclaim, and he partook in a Q&A with Michael Dwyer, the former Irish Times film correspondent and onetime director of DIFF, who died in 2010.

“I remember talking with Michael, and him being really gracious with me,” Farrell recalls. “I don’t mean to try and play the nationalistic card, but I always felt when I went away, I was representing Ireland in some way.

“I’d expected a couple of digs at some stage in the pub some night, just to get one over on me, but everyone was always very decent. And my big thought of that night was everyone being really celebratory. It was this Dublin kid coming back [after] having a bit of success in America… but that kid was me.

“When I think back to my time and what I can remember of the Dublin International Film Festival – I’d have to point the finger at a few blackouts – was that the festival offered me a great kind of anchor.”

By 2008, Farrell was back in Dublin – for the screening of In Bruges at the Savoy cinema, to be precise – with writer-director Martin McDonagh and co-stars Brendan Gleeson and Clemence Poesy.

“It was a very special experience shooting the film. To have Martin, who wrote and directed the film, and to have me and Brendan who was at the time and remains one of my favourite actors and favourite human beings – to have that experience with [those] lads and to bring it home, was very, very special,” Farrell recalls.

By that year, Farrell had also quit drugs and alcohol.

“My life was different by that time,” Farrell recalls. “In Bruges was the second or third I did sober and this was one of the first film festivals where I was sober,” Farrell adds.

“After 15 or 20 years of carousing the way I caroused and drinking the way I drank, the sober world is a pretty scary world.

“To come home and not to have the buffer support of a few drinks just to calm the nerves, it was a really amazing thing. And I remember being more nervous, and being more uncomfortable initially at the film festival than any others because I didn’t have any booze.

“Having gotten through the initial discomfort and self-judgments and whatever tensions were created inside me, it was easily the most rewarding film festival that I’d had. And it was the one I could remember the most.”

On hearing the audience’s reaction to the comedy, Farrell adds: “To be a part of eliciting that laughter, my God, I was high as a kite, in my most sober year.”

Two years later in 2010, Farrell returned to DIFF for the premiere of Ondine, directed by Neil Jordan and co-starring Alicja Bachleda, with whom Farrell has a son, Henry, now 11. The two met on the set of the movie – an infant Henry was also in attendance at DIFF that year – and the film clearly has resonance for the Dubliner.

“[The films I’ve worked on] all mean different things at different times, but obviously Ondine was very special, because there’s a little 11-year-old upstairs doing his home-schooling, and he’s only there by virtue of that film and that story,” he notes.

Asked if there’s a film part that he wished he’d played, Farrell replies immediately. “Tootsie,” he says. “It’s one of my favourite films, and everyone in it – Sydney Pollack, Charles Durning, Bill Murray, Jessica Lange – is at their best. And Dustin is just perfect in it. He’s just an asshole, [as Jack Dorsey] and so unlikeable at the start… and Dustin doesn’t shy away from that. It’s just brilliant.”