Vivarium, an Irish science-fiction horror, has world premiere as part of International Critics Week at the film festival 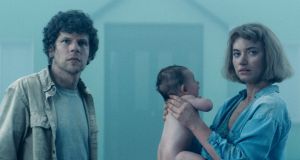 Jesse Eisenberg and Imogen Poots in Vivarium, the Irish film that premiered at Cannes on Saturday

Lorcan Finnegan’s Vivarium, an Irish science-fiction horror, has had its world premiere as part of International Critics Week at the Cannes film festival. A packed crowd at the Espace Miramar responded with rapturous applause to the Saturday morning screening.

Jesse Eisenberg and Imogen Poots star as a couple who encounter all kinds of strangeness after viewing one among many identical houses in a creepy new development some distance from an unnamed city (the film is not quite set in Ireland, but incidental characters have domestic accents and the couple’s car sports Kilkenny plates). They find they cannot leave. Every turn takes them back to the house they have just left. Within days a baby arrives in a box. They reluctantly raise the creepy infant – who ages alarmingly quickly – while futilely plotting escape.

The film’s title and the shot of a cuckoo early on make the central conceit reasonably clear, but the story still finds plenty of hairpin twists and unsettling revelations on the way to a satisfactory ending. It seems likely to sell in many territories.

Vivarium is produced by Brendan McCarthy and John McDonnell for Fantastic Films, a Dublin-based company dealing in genre material, and was supported by Screen Ireland.

Eisenberg, star of such films as The Social Network and Batman v Superman: Dawn of Justice, joined the director, producers and representatives of Screen Ireland for the unveiling.

Jesse Eisenberg looks lost at the premiere of VIVARIUM, which I liked a bunch. #Cannes2019 pic.twitter.com/HYQ8zaefd0

“It is wonderful to be here at Cannes,” Eisenberg said from the stage. “Particularly as part of the illustrious Critics Week. It is an honour to be part of a wonderful movie with such a great group of people.”

Brendan McCarthy was impressed by the vocal response from the audience.

“It’s quite moving to be honest,” he told The Irish Times. “We have been on this road for such a long time. It is interesting to see it with an audience. We had begun to take it very seriously. So it’s good to see the humour and the lightness. The underlying theme is so dark, it’s good to laugh and I am glad it played that way. That’s the thing about seeing it with an audience. We make the film in isolation.”

The word is that the final cut was only finished last week.

“We finished last Friday,” McCarthy confirmed. “We did a test screening to make sure it was okay and then sent it to Cannes.”

The oldest of the major parallel strands at Cannes, Critics Week, which welcomes first and second features by promising directors, has, in earlier years, launched the careers of such talents as Bernardo Bertolucci, Wong Kar-wai, Jacques Audiard and François Ozon. In 2000, Alejandro González Iñárritu, the Oscar-winning president of this year’s jury, announced his arrival to world cinema when Amores Perros premiered in the strand.

Some 1,050 features were submitted this year and only seven were selected. Vivarium is the first Irish feature to play in Critics Week since Peter Lennon’s Rocky Road to Dublin in 1968. That film has a place in Cannes history as the final film to screen before the festival closed in solidarity with the student protests in Paris.

The Cannes film festival continues until May 25th.