French social discontent gets a look-in at Cannes

Flying saucers turn out to be recurrent motif, as zombie comedy gets mixed reception 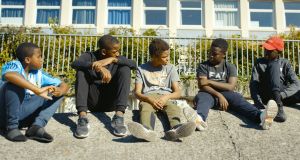 Here’s a question nobody seems to be asking. What effect have the gilets jaunes disturbances had on the Cannes film festival? The last time the bash began after any similarly sized disturbances – in 1968 – it ended up clattering to a premature cause while Jean-Luc Godard bellowed. There has been scarcely a word about the protests in the first two days of an event that changes itself at a geological pace. Maybe the security is a little stricter than last year. That’s about it.

It was, thus, jarring to be plunged into France’s current social discontents at the premiere of documentarian Ladj Ly’s stirring fiction debut Les Misérables. There is a direct reference to the similarly titled novel in the early sections of this buzzy, fast-paced study of the interaction between cops and citizens in an outlying section of Paris. The film is set in Montfermeil, where Victor Hugo conceived the doorstop, and, as a casually racist officer explains to a rookie, the versions of Cosette and Gavroche that remain are now from immigrant communities.

The picture has a familiar shape. Stéphane (Damien Bonnard), the new guy on the squad, is still moral (or naive) enough to believe that the right way to proceed is with decency and honour. His partners, an utter cynic and a war-weary person of colour, have long ago accepted the compromises that help the job run that bit more smoothly.

The film looks back to the 2005 Paris riots and comes to the conclusion that not much has changed. A native of Montfermeil, Ly emerged through web-based socially conscious documentaries and here demonstrates that he has the chops for the biggest screen in the biggest festival. It is odd that his focus is mainly on the cops, rather than the local community, but that does allow for some mainstream policier action that helps the medicine go down with a surge.

The most talked about picture in the opening days of Un Certain Regard – the most prominent sidebar event – was Annie Silverstein’s Bull. Fans of a recent Irish release by Carmel Winters may be tempted to think of it as Floats Like a Bull (sorry). Ms Silverstein’s feature debut concerns a troubled Texan 14-year-old girl who, with mum in jail and Granny gravely ill, causes havoc for a local black neighbour and, while in the process of making amends, becomes interested in his career as a bull rider. There are perils here. We’ve seen many films in which socially excluded young people get back on the rails while pursuing an eccentric interest. Silverstein, who won the Cinéfondation short film prize at Cannes in 2014, wisely holds back on the unlikely sporting triumph. As in Winters’s Float Like a Butterfly, the physical activity is used more as background colour than as the film’s driving force.

Not everything sparks here. The central performance by Amber Havard – clearly a gifted actor – is just a little too toned down. Her sourness is, however, believable. There’s something universal about this teen’s preference for prison over helping out a neighbour. “Can’t you just send me to juvie,” she asks a cop.

We will see more such films, as the sort of film-makers who launch work at Cannes try to figure out what makes the people who voted for Donald Trump tick.We probably won’t see too many films that tackle an adjacent issue in the manner of Jim Jarmusch’s The Dead Don’t Die. This year’s opening film – a zombie comedy starring Bill Murray, Tilda Swinton and everyone else – did not debut to universal appeal. Some critics found it too trivial and too fond of its self-conscious gags. But the film is undeniably funny and it really does grapple with the post-millennial gloom that climate change and Trumpism has brought to much of America. We yell “spoilsport!” at the detractors.

Other films receiving good notices in the opening days included Quentin Dupieux’s Deerskin, a deranged comedy in Directors’ Fortnight, and Monia Chokri’s A Brother’s Love, which opened Un Certain Regard. But this corespondent’s favourite film in the opening spurt is Kleber Mendonça Filho and Juliano Dornelles’ mad, baffling, angry Bacurau. Mendonça, Brazilian director of Cannes favourite Aquarius, now co-directing with his regular production designer offers us a treatise on post-colonialism and contemporary racism in the form of a 1970s exploitation thriller. A small town in the interior of Brazil wakes up to find itself wiped off the maps – physical and online – as it struggles with local politicians who have deprived them of electricity and water. Meanwhile, a cabal of malign foreigners led by the unbeatable Udo Kier (no better man for the job) appear to be hunting the townspeople for sport.

The directors sometimes drift too far towards the surreal (there are flavours of the awkward Mexican director Carlos Reygadas), but, for the most part, Bacurau manages an unlikely blend of cinephile homage and socio-political parallel. Shot in an anamorphic widescreen that recalls high-end video nasties such as Cannibal Holocaust, featuring a soundtrack that nods to John Carpenter, the picture revels in the scooping out of evil innards and the construction of surprising conjunctions. Look, it’s Sonia Braga as an unstable matriarch drinking cashew milk in the jungle while listening to Spandau Ballet.This may be the first time that two of the opening three films in the Cannes competition featured the unlikely arrival of a flying saucer.

Brigitte Nielsen on giving birth at 54: ‘I was trying until there were no embryos left’
7

Seamus Heaney, our dad the poet, by Catherine, Chris and Mick Heaney
9

How was the Irish Border drawn in the first place?
10