Céline Sciamma: I wanted to make something that breaks your heart. That’s a spoiler 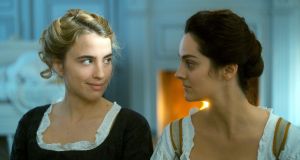 Adèle Haenel and Noémie Merlant in Portrait of a Lady on Fire. Photograph: Curzon Artificial Eye

Until now, the work of film-maker Céline Sciamma has been defined by contemporary coming-of-age narratives and such attendant themes as the fluidity of gender identity during adolescence.

Water Lilies (2007) chronicled the sexual stirrings of three 15-year-old female synchronised swimmers in a middle-class suburb of Paris. Tomboy (2011) followed a gender non-conforming 10-year-old over a hazy summer. Girlhood (2014) featured Marieme, a teenager who, in defiance of an oppressive environment and few future prospects, straps down her breasts and falls in with a tough gang of girls.

Those films, as the director notes, required careful age-appropriate management. Her newest feature, Portrait of A Lady on Fire, was a brave new world in several respects, not least as her first adult-oriented film.

This is, after all, the spontaneous film-maker who cast Zoé Héran in Tomboy and then asked her to bring her chums along to play the other characters. The football match and water fight in that film are not staged.

“Directing adults is not the same kind of collaboration as you have with a teenager or kid,” says Sciamma. “Normally I’m watching people become actors in the process of making the film. It’s very important you have a lot of respect when you are dealing with young people. You are in charge of everything about the process. You’re an adult and they’re not. So this was a completely new way to work for me. The ambition for the film is that it is about an artist so that was a fun meta idea between all of us. Because in the film, we are in an artist’s workshop and the artist is looking and we are looking at her looking.”

Sciamma’s screenplay for the Oscar-nominated My Life as a Courgette revealed a rare gift for writing children, so watching what she calls her “first film after leaving teenagehood” is an intriguing (and most rewarding) prospect.

Set in 1770s France, Portrait of a Lady on Fire focuses on artist Marianne (Noémie Merlant), who travels to a remote island off the Brittany coast, where she is commissioned to paint the portrait of a reluctantly betrothed Héloïse (Adèle Haenel). Their relationship blossoms into friendship, and ultimately love, a development that is as surprising as it is doomed.

For all the director’s trademark minimal dialogue and carefully calibrated formalism, it’s a very lush Gallic heartbreaker, one that deserves a place in the weepie pantheon that includes Les Enfants du Paradis or Les Parapluies de Cherbourg.

“Oh yes, if you want heartbreaking you’ve come to the right film,” laughs Sciamma. “I never thought about those kinds of French films but I’m glad you do. I have often had trouble finding a precedent for my work but especially for this film. It’s the genre of the period piece and trying to be candid within the dialogue and trying to do something that hasn’t been done before and being brave with the language of the film: all of those things were challenging.

One of the film’s most unexpected innovations is its evocative use of Summer from Vivaldi’s Four Seasons, a piece that is typically the kind of classical warhorse one expects to encounter at an André Rieu extravaganza.

“I wrote the film knowing the ending before I knew all of the context of the ending and I knew I wanted to use Vivaldi,” says Sciamma. “Because Vivaldi is conventional and it’s very democratic music. It’s something that everybody can connect with. But I wanted them to hear it in a different way. Especially because in France it’s the music they play when you’re waiting on a phone for administration. It’s such a beautiful piece of music. It deserves better.”

There’s plenty of metatextual games and speculations to be had from multiple viewings of Portrait. Marianna is not, Sciamma says, a surrogate for the film-maker, despite the film’s pointed inversion of the male gaze. Still, Portrait of a Lady on Fire is a film about a muse that was written specifically for Sciamma’s own muse. Since 2007, the director has cast Adèle Haenel in Water Lilies, Pauline, and Portrait of a Lady on Fire.

'I come from a culture where I write and direct my own material ... My film-making is the privilege of French cinema'

In 2014 Adèle Haenel publicly acknowledged that she was in a relationship with Sciamma in her acceptance speech for her César award. The pair have subsequently split up but remain friends and collaborators. They appeared on the red carpet at Cannes last May – where the won the Queer Palm and the award for Best Screenplay – wearing matching 5050 pins in support of the 5050 by 2020 movement, a group of French film industry professionals lobbying for gender parity in film by the year 2020.

“Oh yes: it was the case that she would be the character of Héloïse,” says the writer-director. “That is something that surprised people at first. People thought I would write her as the painter. We were both laughing about this, because she thought: of course, I’m going to be the model but others thought there couldn’t be enough for her in the model role, that being a model was not good enough.  But that’s the point. Because the movie is all about how the models are co-creators of what’s in the frame.”

Portrait of a Lady on Fire took five years to write. As ever, Sciamma rejects conventional guides to structure and scriptwriting in favour of building the film around a series of indelible images, including cliff walks with an Orpheus undertone, an 18th-century abortion, and the titular tableau. She’s a decidedly French auteur and yet she’ll often cite unpretentious American movies among her influences. The stately Water Lilies used American Pie – of all things – as a kind of template. Might we someday lose her to Hollywood?

“Well, I’m open to things,” she says. “I mean I come from a culture where I write and direct my own material so if I went elsewhere I have to learn to speak a different kind of film language. My film-making is the privilege of French cinema. I would have to do things totally differently elsewhere. But I think I could learn from that and have fun being part of a bigger collective.”

Cannes has been a good platform for Sciamma. In addition to last year’s prizes, her debut feature played in Un Certain Regard and Girlhood screened as part of the Directors’ Fortnight section. She co-organised the women’s protest against inequality at the 2018 Cannes Film Festival, standing shoulder to shoulder with Ava DuVernay, Cate Blanchett, Léa Seydoux, and the late Agnès Varda.

“We have 25 per cent of women directors,” says Sciamma. “So we have more women directors than most places in the world. The difference that I see now is that it is a political question. For a while, it was hard for people to talk about a colour-blind agenda or gender equality. But now we’re having the right kind of conversations. I’m very privileged in the industry and I’m trying to use that privilege to keep having those right conversations. I don’t know if it’s any easier being a woman in film. But at least we’re talking about it.”