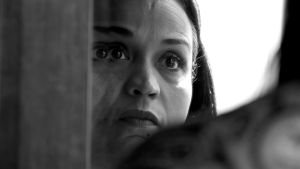 There comes a moment late in this award-winning new documentary from Garrett Bradley when the film’s plucky protagonist Sibil “Fox Rich” Richardson finally snaps. “These people have no respect for other human beings’ lives,” she says to the camera. “No matter how sane or how understanding you try to be, it just will make you lose your absolute mind.”

Her anger is righteous in the circumstances. The daughter of an educator and granddaughter of Hank Williams’s housekeeper, Fox Rich was raised to believe wholeheartedly in the American dream. Having married her childhood sweetheart Rob, she opened a hip-hop clothing store in Louisiana. By 1997, the couple were struggling with debts and were desperate enough to hatch a plan to rob a bank. No one was hurt in the botched attempt, but Rob was sentenced to 60 years in prison, and Rich was released after serving 3½ years.

Bradley, who was second unit director on Ava DuVernay’s When They See Us, is not overly concerned with the facts and figures of America’s industrial prison system and its disproportionate sentencing of persons of colour. Working from monochrome home movies, new material shot by Zac Manuel, Justin Zweifach and Nisa East, and soaring piano music by Emahoy Tsegué-Maryam Guèbrou (the nonagenarian Ethiopian “Honky Tonk” nun), the filmmaker creates a moving impression of a life not lived. Births, first steps, first days at school, his son’s graduation from dental school: all pass without Rob.

His not being there becomes a presence in a home where the entire family pivots around the fight for his release. The twins who are born after his incarceration are named Justus and Freedom. At college, Freedom majors in political science in order to take on the carceral state. Every mundane act or journey provides a poignant reminder of absence. “My passenger seat is empty,” Fox forlornly tells the camera.

Time won the best director documentary prize at Sundance this year, making Bradley the first black woman to win in that category. It was subsequently purchased by Amazon Studios for a seven-figure sum. It’s worth every cent and more.

Covid-19 and dementia: ‘My father studies me, as if trying to put together a difficult jigsaw’
5

Million Pound Cube: The answer to fast cash before Britain collapses into a barter system
7

Leonard Cohen: the key songs and what they mean
10