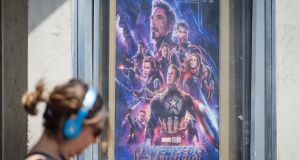 Three months after its release, Avengers: Endgame has officially become the highest-grossing film of all time. The latest addition to the Marvel Cinematic Universe passed $2.79 billion (€2.48 billion) on Saturday to relegate James Cameron’s Avatar, at the top for 10 years, into second place.

The battle had been hard fought. After breaking every opening-weekend record which mattered in April, Avengers Endgame looked to have pulled up just short of Avatar’s overall total. A re-release with some extra footage last month allowed it to scrape its way to the title.

The nabobs at the Walt Disney Company, which owns Marvel Studios, were quick to celebrate their success. “A huge congratulations to the Marvel Studios and Walt Disney Studios teams, and thank you to the fans around the world who lifted Avengers: Endgame to these historic heights,” Alan Horn, Disney co-chairman and chief creative officer, said. “Of course, even with the passage of a decade, the impact of James Cameron’s Avatar remains as powerful as ever.”

Horn may have mixed feelings about Avatar’s demotion. That film and its upcoming sequels became part of the Disney Empire when it acquired 21st Century Fox in March. The words “sequel to the highest-grossing film ever” can no longer appear on the poster when Avatar 2 is released in late 2021.

The Walt Disney Company now controls seven of the titles in the all-time box-office top 10. That slate comprises five Marvel films, one Star Wars release and the first Avatar picture. The Lion King just opened to record figures for July. Disney’s Frozen 2, due in November, is also likely to score massive figures. The news about Endgame comes as Disney announced the next wave of Marvel releases at the Comic-Con event in San Diego. The so-called “Phase Four” includes 10 projects featuring the Studio’s fecund band of superheroes. Some will appear as features in cinemas. Others will stream as series on the upcoming Disney+ service.

When the all-time box office figures are adjusted for inflation, Gone With the Wind retains the place it has occupied since shortly after its release in 1939. Older epics such as Doctor Zhivago, at number seven, and The Ten Commandments, at number eight, speak to the mass appeal of cinema in the last century, but Avatar manages to hold on to the number-two spot in the adjusted list. Avengers: Endgame is at number five and, wheezing after its re-release, is unlikely to advance much further.

Cynics will argue that the unadjusted list is of limited use in assessing the actual popularity of a film, but, in more than a century of commercial cinema, just 11 releases have held the title. Endgame completes a select group that also includes The Birth of a Nation (1915); Gone With the Wind (1939); The Sound of Music (1965); The Godfather (1972); Jaws (1975); Star Wars (1977); ET the Extra-Terrestrial (1983); Jurassic Park (1993); Titanic (1987); and Avatar (2009). Four from the list won best picture at the Oscars and, of those released after the awards were inaugurated, only Jurassic Park failed to be nominated. It will be interesting to see if Endgame’s massive figures will sway the Academy in February.