Cats trailer: It's like if celebrities became deformed mutant cats but were still kind of sexy

Patrick Freyne: A bunch of cats in an alleyway is not remotely as magical as this film depicts 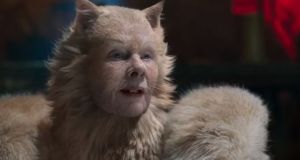 Things the trailer for Cats gets wrong:

There’s a lot of footage in this trailer of cats being amazed because something wonderful is apparently happening. My cat has never been amazed by anything. My cat stares sullenly at wonderful happenstance and then vomits on our nicest rug. This does not happen in this trailer. Lead “cat” Francesca Hayward doesn’t vomit even once.

None of these cats goes up to the door, whines until someone opens the door, then doesn’t exit through the door but sits there staring up at the viewer until they make the rain stop.

None of the celebrities in the trailer for Cats shits in a box of sand while making eye contact with me as I try and drink my coffee. That said, I could tell that Idris Elba was thinking about doing this. He definitely went method in the course of this production. Apparently, he lived as a cat for a whole year.

A bunch of cats in an alleyway is not remotely as magical as this film depicts.

The cats in the trailer for Cats slink about sexily whereas my cat wanders around lumpenly with the heavy tread of a fully grown human man, bellowing and dropping twigs everywhere (she likes to roll around in twigs when she’s in our garden) and sporadically scratching me for no reason. If someone was to make a cat-person film based on the behaviour of my cat, there would be no singing and it would have to be directed by someone like Lars Von Trier or Satan.

I think this film might give young people an unrealistic idea of how sexy cats are. They're really only about half as sexy as this film depicts.

Things the trailer for Cats gets right:

Since the dawn of time, man* has asked the question: “What if my favourite celebrities were deformed mutant cats but, you know, kind of sexy?” Now we know. Well done everybody. Well done.

None of the cats have jobs and they ruin the house of a good taxpayer. This is pretty accurate.

James Corden is in it. If I know cats, and I do know exactly one cat, they really like the books of Dan Brown, the music of the Venga Boys and the clownish buffoonery of James Corden.

Some of the cats in the trailer for Cats wear clothes. My cat wears clothes. I don’t know where she gets them from. I think she shoplifts. However, most of the cats in Cats do not wear clothes in order to fit Tom Hooper’s production note that they be “in the nude.”

At the end of the trailer for cats all the cats stand in formation raising their right arms to salute the rising sun as Cat Jennifer Hudson bellows “A new day has begun”. This reminds me of the scene in Cabaret in which the fascists sing Tomorrow Belongs to Me in a garden. This is very well observed. Cats are nature’s fascists.

Speaking of nature’s fascists, TS Eliot wrote the original source material for the musical Cats. He wrote it inspired by Ezra Pound’s modernist masterpiece Starlight Express. His dream was to live long enough “to see a creepy CGI cat-Judy Dench hybrid circulating on some sort of computerised network of novelty-addled jackasses”. Sadly, he never lived to see his dream.

‘If you are nomadic, your songs and tales become national’
8