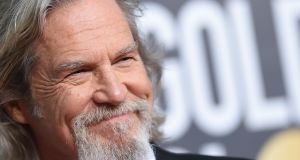 Academy-award winner Jeff Bridges, known for his role in the 1998 film The Big Lebowski, has been diagnosed with lymphoma, the actor announced on Monday evening.

Bridges (70) used the signature voice of his character The Dude from the cult-classic film to disclose his condition, tweeting: “As the Dude would say.. New S**T has come to light.”

“I have been diagnosed with Lymphoma. Although it is a serious disease, I feel fortunate that I have a great team of doctors and the prognosis is good. I’m starting treatment and will keep you posted on my recovery.

I’m profoundly grateful for the love and support from my family and friends.

Thank you for your prayers and well wishes. And, while I have you, please remember to go vote. Because we are all in this together. https://t.co/6sAU4MYixl

“I’m profoundly grateful for the love and support from my family and friends. Thank you for your prayers and well wishes.”

He ended the message by urging people to vote in the presidential election, adding: “Because we are all in this together. Love, Jeff.”

The actor is a seven-time Oscar nominee, winning the award in 2010 for his role as a country musician in Crazy Heart.

A veteran of the industry and from a prominent Hollywood family, Bridges is known for his laid-back personality and has acted in critically acclaimed movies such as Starman, Thunderbolt and Lightfoot, The Fisher King, and the Coen brothers’ remake of True Grit.

He has also appeared in commercially successful films such as the first instalment of the Marvel franchise Iron Man.  – Reuters, AP